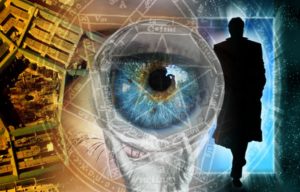 Remote viewing: the phrase sounds perfectly ordinary, though somewhat vague. Looking at it, one might think of telescopes or binoculars. The more tech-savvy may think of accessing another computer from afar.

And thus all of them would completely miss the paranormal implications and history behind those words. In fact, remote viewing refers to a technique by which people can use paranormal means, particularly extra-sensory perception (or “sensing with the mind”), to seek impressions of distant or unseen targets.

A remote viewer is expected to be able to give information about an object that is hidden from view and is some distance away. Early experiments conducted on remote viewing yielded promising results; however, more recent and strictly-controlled experiments have not been as positive as to whether remote viewing is plausible.

The scientific community generally regards remote viewing as a pseudo-science; it is regarded with skepticism due to lack of evidence, lack of a theory to explain remote viewing, and lack of consistent and repeatable experimental results.

“Remote viewing” was a term coined in the 1970s by parapsychology researchers at Stanford Research Institute, who were attempting to distinguish it from clairvoyance.

Although it remained a secret for a long time, the CIA also became interested in remote viewing, going as far as funding a $20 million research program called the “Stargate Project” to determine any potential military application of psychic phenomena.

The Stargate Project was terminated in 1995, due to a lack of useful results; when documents related to the “Stargate Project” were declassified, it stirred the public’s interest in psychic phenomena, which includes remote viewing.

Long before the term was coined, remote viewing was investigated along with other psychic phenomena in the mid-nineteenth century. Major scientists studying such phenomena primarily experimented by carrying out focused experimental tests on specific individuals who were thought to be psychically gifted.

This led to some successful results; but even at the time, it was met with skepticism. In the 1930s, a scientist interested in psychology and parapsychology expanded earlier methods by conducting experimental tests on members of the general public, not just specifically selected persons who were thought to have psychic gifts.

However, knowing of the skepticism that earlier experiments had been met with, he was reluctant to publicize his work. For a long time, this enduring skepticism ensured that remote viewing and other psychic phenomena were not taken seriously.

This abated in the 1960s, when countercultural attitudes muted prior hostility, amid the emergence of New Age thinking and the growing popularity of the human potential movement.

Thus the paranormal studies that were initiated at Stanford Research Institute became possible. It was in identifying and naming different psychic phenomena that “remote viewing” came to be named; and early experiments conducted there were praised for having improved the methodology of testing remote viewing and raising future experimental standards.

Although it was not public knowledge for a long time, the US government also funded and investigated psychic phenomena, from approximately World War II until the 1970s. This interest was enhanced upon learning the Soviets and China were also conducting psychic research; the US provided additional funding for such matters due to wanting to have a competitive research program.

In particular, funding and sponsorship was provided by the CIA, which wanted to investigate methods by which paranormal abilities could be used in their work. This led to the Stargate Project, which investigated many types of psychic phenomena.

There are conflicting reports of the results of the CIA research and experimentation into remote viewing; on the one hand, the intelligence gathered by remote viewers has been criticized as unclear and lacking detail, not useful enough to be used in any intelligence operation.

On the other hand, scientists and remote viewers have both claimed that a number of psychic were crucial in the success of intelligence operations; one remote viewer in particular was awarded a legion of merit for determining essential information – “crucial and vital intelligence unavailable from any other source.”

The opinion that remote viewing experimentation had not led to anything particularly useful gradually predominated the CIA. Eventually funding dissipated, and the program and its results were evaluated to determine its legitimacy as a point of research.

Even the last evaluation of its results was in dispute, though – some reviewers said that experimentation led to a statistically significant positive effect proving that extra-sensory perception exists, while others said that the conclusion was premature, and more investigation would be necessary, with a higher level of critical research and more stringent guidelines for controls.

Research into remote viewing has provided checkered results; initially, the experiments yielded positive results, then those results were met with skepticism that grew more widespread, only have that skepticism be abated by the counterculture and human potential movements, but later skepticism and debate were renewed upon examining results. However, the most recent studies into remote viewing suggest positive results for this phenomenon.

Given its varied history, it is uncertain what the end result will be regarding remote viewing. Will it eventually be proven as a revolutionary, reliable ability? Or will further research show that its plausibility is questionable at best?

Science and Healing Through Astral Projection