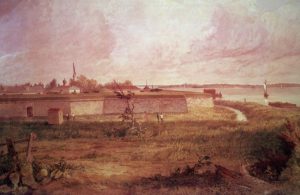 The Philadelphia, Pennsylvania Army citadel was originally called Fort Island Battery and Mud Island Fort. The facility was constructed in 1771 on Mud Island in the Delaware River.

Through the years, there have been numerous accounts of paranormal events associated with Fort Mifflin. The first event was in the late 1770s when the wailing of women could be heard mourning the loss of their soldiers during the siege of Fort Mifflin. There were no women there at the time.

Many believe that she is the ghost of Elizabeth Pratt who lived in the Officer’s quarters with her family. Her daughter wanted to marry an enlisted man, to which Elizabeth objected. They were quarreling about this when the daughter developed typhoid fever and died before they could reconcile. Elizabeth screamed from anguish, then hanged herself.

The Philadelphia police have been called on occasions when people heard her cries. Thorough investigations found no human source for the sounds.

Witnesses have seen the ghost which is believed to be that of William H. “Billy” Howe in this area. A casemate, originally a vaulted chamber in a citadel, is a fortified structure from which weapons are fired. Howe was a Civil War soldier, not the British Revolutionary War General Sir William Howe as some have written.

It’s said that Billy became ill during the Battle of Fredericksburg when he couldn’t get medical treatment, so he returned to his Perkiomenville farm where his wife tended to him.

Two bounty hunters tried to break into his home during the night and he, while trying to defend his family, killed one of them. He was found guilty of desertion and murder. Billy was the only person hanged at Fort Mifflin.

Farrier Jacob Sauer was ordered by the Commandant to keep the doors to his shop closed. He used to get into trouble by allowing them to stay open.

The spectral lamplighter walks about carrying an oil-burning lantern. There are reports of a phantom sailing ship sighted in the water by the fort. The ghostly sad-looking man walks on the road to the fort’s gate, then suddenly vanishes.

The apparitional tour guide, dressed in colonial attire appears to be so real that people mistake him for a staff member. He has taken people on tours when human guides weren’t working.

Disembodied voices of children, soldiers, sailors and civilians and dogs’ barking have been heard and documented. People have smelled the scent of wood fires burning and the aroma of baking bread.

Witnesses have felt the warmth of a fire in the heath in one of the Mifflin’s casemates when there was none. There have been reports of people being pushed, touched, restrained and pulled by invisible hands.

Most of the activity experienced at the facility would be defined as a haunting by parapsychological theory. There is no intelligence and the incidents are consistently replayed. It’s energy imprinted on space and time.

The blacksmith is an entity agent poltergeist, EAP, manifested by PK, psychokinesis, the ability of the mind to affect matter. The tour guide is an apparition, a ghost that has intelligence.

Both the EAP and the apparition are based on survival theory, that a part of the human survives death of the physical body. One has to wonder what people thought when they discovered their tour guide was a ghost.