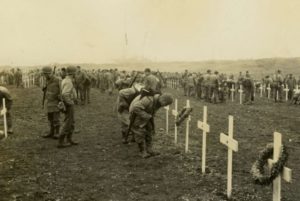 A few years ago the so-called ‘black archaeologists,’ people conducting independent excavations in the places of World War II battles and looking for precious war trophies, were extremely active. Sometimes during their search they would encounter very strange phenomena.

Bonfire hanging in the air

In 1997, a group of six people headed to Luban in the Leningradsky region, where the ruins of Makaryevsky monastery destroyed during the war rest amidst the swamps. Nearing the ruins, the group noticed bonfire flames. They were shocked to find out that the bonfire was hanging right in the air. As soon as they approached the ruins, the bonfire disappeared.

The “black archaeologists” fixed a camp in the ruins. Throughout the night, they were bothered by wild human screams originating from the woods. None of them rushed to help.

Next morning, one of the archaeologists went to the woods and got lost. He came back three hours later, with his clothes dirty and insane look on his face. He never told his friends what happened to him.

One of the most famous anomalous zones connected to World War II is a marshy valley Myasnoy Bor located 30 kilometers away from Novgorod. Many warriors of the Soviet Second Attack Army, divisions of German Wehrmacht, Spanish “Blue Division” and other troops perished in this area during the Lyuban Offensive Operation of 1942. Many unburied remnants are left here.

Galina Pavlova, head of the group “Search” from Engels city in the Saratov region told about an incident that happened to her in 1997: “The woods of Myasnoy Bor are scary and mystical.

As soon as you are left there by yourself, the woods start making sounds. You can clearly hear yells “Hooray,” as if restless souls of the perished warriors still carry out an attack. The day we found the mines, I was behind the guys on a trail.

I stopped at a spot that was excavated many times before. Suddenly, I saw that trees were leaning towards the same spot although it was not windy at all. I called the guys, and we found a decomposed wooden box and old mines.”

Alexei, a “black archaeologist” who used to excavate in the woods near Bryansk where Russian front was located in 1942-1943, told an interesting story.

“We excavated the bodies of six Russian and 11 German soldiers, four of which were Wehrmacht soldiers in a swamp trench shelter. We cut the logs and discovered decomposed German boots with bones sticking out.

Then we began a more careful excavation, and found pelvic bones, a spine, and ribs. Little by little we dug out remnants of four people. It was getting dark. We left the skeletons at the trench and camped out on a meadow about 200 yards away.

At night something happened. We were woken up by Valera, a guy on duty. He told us that something weird was going on. We got up and started listening carefully. We could hear German speech, songs, laughter and clatter of tracks. It was very scary.

In the morning we went to the trench. It looked the same as when we left it. But when we walked a little further, we saw tank ditches and, most amazingly, fresh tank tracks.”

Members of an expedition of the Voronezh committee for studying anomalous phenomena led by a famous researcher Genrikh Silanov managed to take pictures of people clad in soldiers’ uniform near tents.

A plane phantom appeared on one of the photos. The researchers believe that these were the pictures of World War II. One of the pictures showed the silhouette of a Czech soldier. Later the researchers found that a Czech division that was a part of the Soviet Army used to be located in that area.

Silanov believes that the pictures were typical “chronal mirages” created by the so-called “memory fields” connected to dramatic events that occurred in the past.