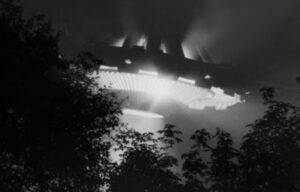 “Oval-shaped objects, sitting there spinning, then moving like crazy.” This was the description given by one witness– one of the many– who witnessed strange sights in the skies over Felton on the night of Sunday, October 14, 1973.

This particular sighting, witnessed by two boys and two adults, happened at around 8:45 pm and coincided with several other reports coming in from eastern York County. Still more reports came in on Monday evening.

Detailed descriptions, however, were provided by the Felton witnesses who saw the UFOs just west of town near Lebanon Lutheran Church.

Descriptions were provided by the two boys, Jeffrey Christenberry, 14, and Mark Anderson, 10.

Christenberry stated that the oval-shaped spinning objects had “a white circle around ’em and a red beam that comes down” and he said that the objects were visible for about five minutes, before they suddenly disappeared.

Anderson said: “They were all over the sky, moving like crazy… really bright, brighter than any star… and three of ’em were shooting white lights at each other.”

The objects were also seen by Mr. and Mrs. William Huson, of Felton, and their five-year-old daughter, Dawn. Jeffrey Christenberry was Mrs. Huson’s son. According to Mrs. Huson, there were three oval-shaped objects, having “a white circle with orange around”.

Mrs. Huson and Jeffrey had seen the UFOs before. About two months earlier, one UFO– similar in appearance to the ones seen on October 14 but much larger in size– appeared to have landed in a field near the Huson home.

On Monday night, October 15, a large number of Delta residents sat on their porches or stood in their yards, watching in awe as a flashing red and blue object circled the skies for approximately 30 minutes, beginning at 7:15 pm. This object was seen close to the Susquehanna River, less than a mile from the Peach Bottom nuclear power plant.

One of the witnesses was William Ramsay, a bus driver for the Southeastern School District. Ramsay was one of the neighbors who had gathered at the Bradley residence to watch the strange spectacle. “It had rotating lights,” he said, “and it kept coming and going”.

While rotating red and blue lights in the vicinity of a nuclear plant might have a rational explanation, the other UFOs seen the day before cannot be so easily explained.

One man, who told of his experience to the York Daily Record, said that he had observed a “bright orange light” in the Shiloh-Weigelstown area on Sunday evening. Although he was a skeptic when it came to UFOs, he believed that “this was something out of the ordinary”. The man’s wife also confirmed the sighting.

“It’s really moving… now it’s turning… There! It’s going over to my right. It’s orangish-yellow, very much like a star, a great big light in the distance, very far off.”

This was the description given to the York Daily Record by a housewife from Mt. Wolf, as she described an object she watched from her kitchen window that Sunday night for over an hour. Fearing ridicule, she did not give her name to the paper, although her description of the UFO perfectly matched those given by two of her neighbors.

At around the same time, Windsor Township police were checking out two reports of sightings near the Locust Grove Elementary School, and a slew of other reports coming in from Yoe to Yorkana.

Robin Gohn, 15, said she spotted an object shaped like an “upright rectangle” with red flashing lights at around 7:30 pm through the living room window of her family’s home in Locust Grove. When she looked out the window again two hours later, it was still there.

At this point the girl’s father, who had refused to believe that there was anything strange going on, grabbed the binoculars and took a look for himself. He, too, saw the object. Shortly after 10 pm, the Locust Grove UFO, according to multiple witnesses, began “beeping”.

More than 40 years have passed since the skies over York County were crawling with strange flying objects and no explanation has ever been found. However, these sightings appear to be linked to a rash of similar sightings seen throughout the United States that week.

The UFO activity peaked on Wednesday, October 17, 1973, as hundreds of strange sightings took place in virtually every part of the country– and each sighting seemed to be stranger than the last.

There was even one object that looked like a spider and landed on a golf course in San Francisco, while another UFO was observed by the governor of Ohio while driving through Michigan with his wife.

The sheer number of UFOs reported that week even caught the attention of Dr. J. Allen Hynek of the astronomy department at Northwestern University, who urged Congress to investigate the wave of sightings.