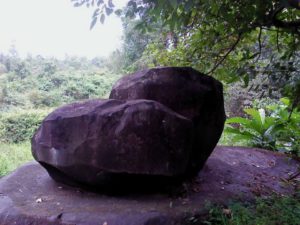 The ringing rocks are the rocks that ring like bells when struck with a hammer. The rocks located in various places all over the world, but the most famous sites located in Southeastern Pennsylvania, these include the Stony Garden (Haycock, Bucks County), the Devil’s Race Course (Franklin County), others in the South Mountain region and at Pottsdown, and the Bell Rock Range of Western Australia.

Set in a forested area, the ringing rocks appear in a field that has no vegetation except lichens. Ten feet thick and seven acres around, the rocks are composed of diabase, in other words part of the Earth’s basic crustal structure. Though this is undoubtedly a natural phenomenon, it is an odd one for which no fully satisfactory explanation has ever been proposed.

By far the most studied, is in Upper Black Eddy in Bucks County. It is located a mile west of the Delaware River near the New Jersey state line. 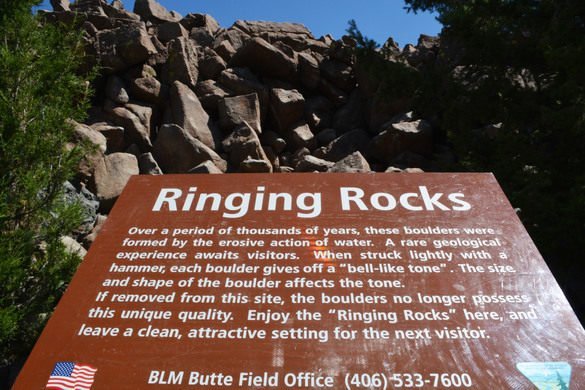 While in Australia the ringing rocks located in Bell Rock Range, it is a large ultramafic gabbro-peridotite intrusion in the Musgrave Block of Western Australia and composed of massive, heavily indurated intrusive rocks and forms a prominent 15 kilometers (9.3 mi) long range of mountains and hills. The intrusion is called the Bell Rock Range because, when struck, the rocks ring like a bell.

In June 1890 Dr. J. J. Ott, backed by a brass band, played a few selections on the rocks for an appreciative Buckwampum Historical Society gathering. Ott, in short, had learned what other investigators have since confirmed: that the rocks don’t have to be in their natural location to ring.

They do not even have to be intact. Curiously, though made up of the same materials, not all of the Ringing Rocks ring — only about 30 percent of them, according to those who have experimented with them.

In 1965 geologist Richard Faas of Lafayette College, Easton, Pennsylvania, conducted laboratory experiments using sensitive equipment. He learned that when he struck a ringing rock, a series of subaudible frequencies were produced, and these added up to a tone that could be heard by the human ear.

However, he could not determine a specific physical cause. Some writers have made remarkable — almost occult — claims for the ringing rocks, asserting that something about the rock field spooks animals, even insects, which make a point of keeping their distance.

According to investigator Michael A. Frizzell, since the area is barren, open, and hotter than the surrounding forest during the summer, thus generally inhospitable to living creatures.

More interesting is a claim made by the late Ivan T. Sanderson, though since then there has been no published replication: “[T]here are some larger rocks which, when hit appropriately, give rise to a whole scale; … two different ringers when knocked together while suspended on wires produce (invariably, it seems) but one tone, however many different combinations are used.”

Curiously the kinds of rock possessing such talents vary. The absence of clear patterns in the creation of such odd geological phenomena continues to frustrate theorists.

Ringing rocks have been noted all over the world and it also can be found on: Musical Stones of Skiddaw – Cumbria, England; Ringing Rocks Point of Interest – Ringing Rocks, Montana, United States; The Hill of the Bells (Cerro de las Campanas) – Querétaro, Mexico; The Ringing Stone – Tiree, Scotland.