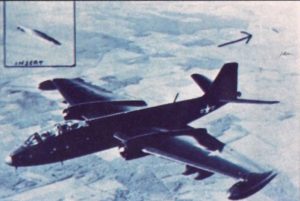 The term Foo Fighter was used by Allied aircraft pilots during World War II to describe several UFO or unexplained aerial phenomena seen over both the European and Pacific Theater of Operations.

Though it initially described a type of UFO reported and named by the U.S. 415th Night Fighter Squadron, the term became commonly used to describe any UFO sighting from that period. Because the origin of their sightings happened during World War II, sightings of foo fighters were thought to have been a glimpse at enemy secret weapons programs.

However, they remained unidentified post-war and were reported by both Allied and Axis forces. According to records, the sightings by Allied forces were treated very seriously and the details of the accounts were submitted to high ranking scientists of the time such as David Griggs, Luis Alvarez, and H.P. Robertson.

The sightings remain unexplained and most of the information about the sightings has not been released by military intelligence.

The first sightings occurred in November 1944 in Germany. Pilots flying by night reported seeing round glowing objects moving swiftly and following their aircraft. The glowing objects were described as fiery, either red, white, or orange in color, and some said they resembled Christmas tree lights.

The pilots and aircrew stated that the objects flew in formation with their own aircraft and maneuvered as if under intelligent control but were never hostile, choosing instead to toy with the aircraft by making wild turns before simply vanishing. 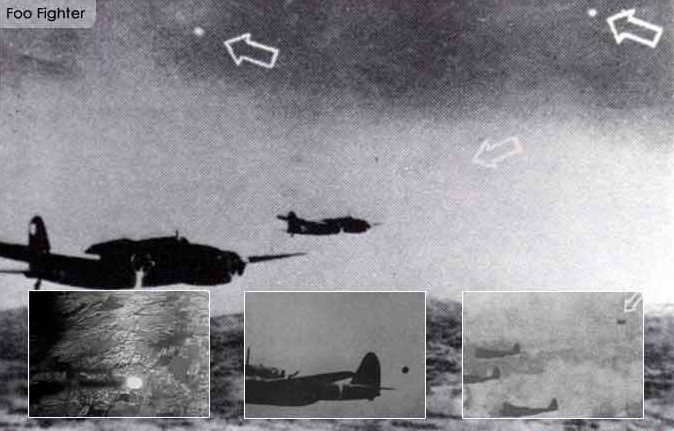 The military investigated the occurrence critically, fearing that the mysterious objects may have been secret German weapons, but further investigation revealed that German and Japanese Pilots had reported similar sightings and no one seemed to have an explanation for the phenomena.

In the January 15, 1945 edition of Time magazine, a story entitled “Foo-Fighter” graced the pages which reported that the “balls of fire” had been following USAAF night fighters for over a month, and that the pilots had given them the name “foo-fighter”.

The article stated that while descriptions of the phenomena varied, the pilots agreed that mysterious lights followed their craft closely at high speeds. Some scientists of the time attempted to provide rational explanations for the sightings.

Many of them offered the explanations that the sightings were an illusion probably caused by afterimages of dazzle caused by flak bursts, while others still suggested these were sightings of St. Elmo’s Fire, a weather phenomenon caused by strong electric fields.

There was a distinct difference, however, in the reports of sightings from the Pacific Theater of Operations compared to the reports of foo fighter sightings in Europe; the “balls of fire” resembled a large burning sphere which “just hung in the sky”, rather than following the crafts, though a few reports of that activity were made as well.

In one report, a B-29 aircraft gunner was able to hit one of the foo fighters with gunfire, causing it to burst and break into several pieces, a few of which fell on buildings below and set them on fire. There was one similarity in the reports in that there were no reports of the objects being hostile to any aircraft.

There have been many attempts to explain the phenomenon of the foo fighters. Renato Vesco, an author, notably revived the wartime theory that foo fighters were a Nazi secret weapon in his writing “Intercept UFO, which was reprinted in a revised English edition as “Man-Made UFOs: 50 years of Suppression” in 1994.

Vesco claimed that the foo fighters had another name, the Feuerball (Fireball, and were in fact a form of ground launched, automatically guided, jet-propelled flak mine. He also claimed that the device was operated by a special SS unit and designed to resemble a tortoise shell in shape.

IT used gas jets that spun like a Catherine wheel around the fuselage to fly and the glowing spheroid appearance was created by miniature klystron tubes inside the device along with the gas jets.

A simple collision avoidance radar was responsible for ensuring that the device wouldn’t collide with other airborne objects, and onboard sensors instructed the craft to swiftly fly away if it was fired upon.

Vesco determined that the use of these devices was to achieve two goals. The first, which was quite successful, would be to distract the pilots who saw them. The second was that electrostatic discharges from the klystron tubes were intended to be used offensively as a method to interfere with the ignition systems of the bombers’ engines, causing the planes to crash.

There has been no hard evidence to support Vesco’s theorie, but the theory has been taken up by many other aviation and ufology authors and it was even used in a television documentary on Nazi secret weapons.

Other common explanations for the sightings were more scientific in nature. As mentioned, St. Elmo’s fire was often given as the explanation, since electrical discharge from the airplanes’ wings may have been the cause of the sightings.

However, the frequency of the sightings prompted another military action in attempt to explain the events. In April 1945, the US Navy began to experiment on visual illusions as experienced by night aviators.

The project was pioneered to study the aviators’ vertigo and was initiated because an assortment of anomalous events was being reported by night time aviators. Dr. Edgar Vinacke, the premier flight psychologist on the project, summarized that there was a need for a cohesive and systemic outline for the epidemiology of aviator’s vertigo with the following:

“Pilots do not have sufficient information about phenomena of disorientation, and, as a corollary, are given considerable disorganized, incomplete, and inaccurate information. They are largely dependent upon their own experience, which must supplement and interpret the traditions about ‘vertigo’ which are passed on to them.”

“When a concept thus grows out of anecdotes cemented together with practical necessity, it is bound to acquire elements of mystery. So far as ‘vertigo’ is concerned, no one really knows more than a small part of the facts, but a great deal of the peril.”

“Since aviators are not skilled observers of human behavior, they usually have only the vaguest understanding of their own feelings. Like other naive persons, therefore, they have simply adopted a term to cover a multitude of otherwise inexplicable events.”

Foo fighters remain an interesting point of conversation for any interested in ufology. They remain unexplained to date and many await the day when military information about this phenomenon will be declassified and made available.