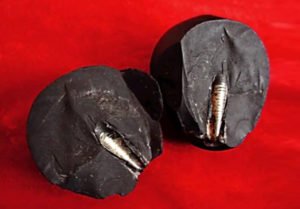 This truly amazing artifact is far older than mankind but was evidently made by someone. The question is: by who?

Discovered in the late 1990s by Zhilin Wang in a remote mountainous area in northwest China, the Lanzhou Stone is one of the most baffling out of place artifacts.

The mysterious stone is pear-shaped, about 6 x 8 cm, extremely hard and weighs 466 grams. Incredibly the rock is of a type that is totally unknown suggesting that in may in fact be a meteorite.

However, it is not only due to its unknown make up that the item has attracted enormous attention from many geologists and collectors around the world but also because of the starling artifact it contains within it.

“More than 10 geologists and global physicists from the National Land Resources Bureau of Gansu Province, Colored Metal Survey Bureau of Gansu Province, the Institute of Geology and Minerals Research of China Academy, Lanzhou Branch, and the School of Resources and Environment of Lanzhou College gathered to study the origin of this mysterious stone.

“After a discussion about its possibility of being man-made and the possible reasons for its formation, the scientists unanimously labeled the stone as one of the most valuable in China and in the world for collection, research and archaeological studies.”

The stone’s current location is unknown and analysis results have not been made public. But there are several interesting assumptions to be made.

First of all, the metal rod was clearly fabricated and required a certain technological level to be manufactured. The unidentified black material could have been anything but the perspective of it being produced seems very likely.

In this case, where did this technology come from? Was the stone a relic from a bygone age, one of the few objects left behind by an advanced civilization? Many alternative history proponents are convinced this is not only possible, but also likely.

It’s an interesting scenario that brings up more questions. If there has been another technologically advanced civilization on Earth, there might have been more.

What would the real history of our planet sound like then? A couple more practical questions would be: why aren’t they here anymore and will the same fate await us?

On the other hand, if the Lanzhou Stone is in fact a meteorite, the plot thickens dramatically. If it’s been traveling through space, its journey probably started a while ago.

It could potentially be billions of years old. Was it deliberately sent here? If so, why? Could it have contained life?

Alas, we might never find the answers to these questions. Many have come to believe that critical evidence needed to support these theories is highly protected and the conspiracy stretches far and wide. Discoveries are suppressed, scientists are discredited and information is adulterated.

The truth is either out there or much closer to us.