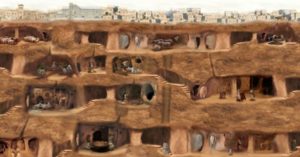 It was in the year 1963 that a man happened to stumble upon a room while renovating his home and in investigating it; he came across several more rooms only to find that they were all a part of the Underground city of Derinkuyu. This city is found in Turkey.

As archaeologists began working on the site, they found out that the couple of rooms that were found were only part of a structure that was much larger.

From the year 1969 tourists were allowed to visit the place, but only a section of it was open to the public while a much larger portion still remained out of bounds.

Derinkuyu is just an incredible achievement and it is really mind-blowing how ancient man managed to build an underground city, this complex thousands of years ago. 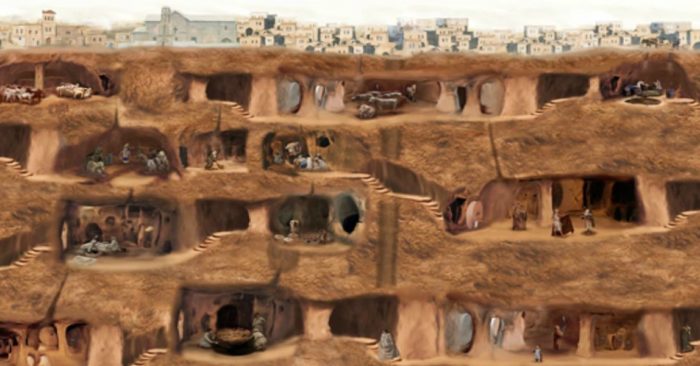 The ancient builders of Derinkuyu had to be very careful when building these underground chambers providing enough pillar strength to support the floors above; if this was not achieved, the city would have collapsed, but so far, archaeologists have not found evidence of any “cave-ins” at Derinkuyu.

The whole city has 8 floors which, in total, reach a depth of about 100m. Some artifacts found at the site suggest that it was possibly built by the Phrygians in the 8th–7th centuries B.C. however, the presents of Hittite-style seals suggest a much older date 1900–1200 BC.

This underground city is found in a town that goes by the same name, Derinkuyu. The city is said to have at least 600 entrances which can be found in different parts of the town and are accessible from the surface.

The city had churches, cellars, wine rooms and even stables. It also had a school. As you descend towards the third and fourth floors you will come across a church. Stairs are what are used to access most of the floors. Additionally, on some of the floors there were water wells but not all floors had them.

This was a preventive measure to ensure the citizens’ safety if there ever was a poisoning. There were also ventilation shafts that could be found on every floor. These shafts totaled 15000 in number. 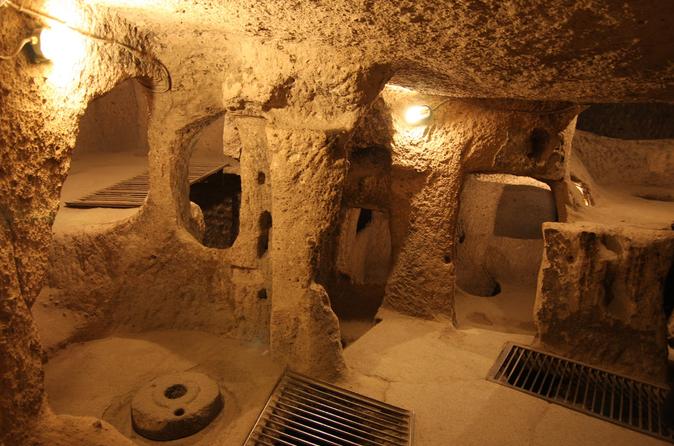 The city had numerous passages and rooms that interlinked with one another. This was probably to allow people to meet up in communal areas of work and most likely worship.

The city was very thought out and well built. This can be seen in the niches that were available for oil lamps and others for stables. There were also chimneys and water storage areas and stores.

Interestingly enough is that the city also had places where the dead could be put until the time when it was safe enough for them to give them a proper burial on the surface.

The city was also well protected in that it had stone doors that were put in place in different parts of the passages and this was to ensure that the passages could quickly be blocked in the event of an attack.

One thousand pound rolling doors, that could have been operated by one person, and they could only be opened from inside. Each floor or level at Derinkuyu could have been locked separately.

Historians consider that the city’s purpose was to protect its inhabitants from invasion around 800 B.c., but many scholars disagree with this theory, arguing that it would have been an immense, too complex engineering project just to have been used to protect people from invasion.

There are so many questions about Derinkuyu, and most of them remain a mystery. Who built this enormous underground city? What could have forced more than 20,00 people into living underground?

What was the actual purpose of this underground fortress? Was it to protect people from war, climate change? Or something else?

Some ancient llien theorists suggest Derinkuyu was constructed for survival, but from an aerial enemy, suggesting that it would be the only plausible reason to hide underground; to remain unseen, claiming that Derinkuyu’s complex security system was put in place to prevent the underground city from being discovered, and was concealed underground, where no one could presume that more than 20,000 people were hiding.