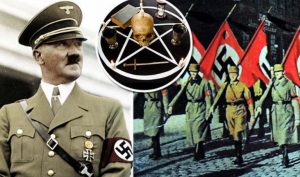 The Nazi regime was more than an attempt to rule Germany and the world politically. It also aimed at spiritual control.

The marriage of Nazi ideology with Occult practices during the dictatorship of Adolph Hitler is not as bizarre as it first appears for esoteric believes were quite popular in Germany since the end of the 19th Century. One aspect of why this union is so interesting is the remarkable assortment of beliefs and distortions the Nazis drew upon.

The Germans could trace their arcane tradition to the Knights Templar and Teutonic, the Crusade’s military orders established during the 12th Century. In the mid-1770s a Masonic group, the Order of Strict Observance was founded. From then on, Hermetic, Rosicrucian and theosophist views were all the rage in Germany as in most of Europe. But, in Germany what can be called a Teutonization process was evident.

Interest in Nordic myths and the Rune alphabet, the concept that all European languages and myths had an Aryan origin as well as the theory that Christianity had ruined Teutonic civilization, predisposed the nation on its march toward totalitarianism, paganism and war.

Furthermore, influenced by the Faust legend as well as Apollonian principles, Germans rejected any thing Spanish, like Picasso; African, including such American favorites as jazz and Asian, like the Polynesian influence paintings of Paul Gauguin.

Nazis and the Occult

The Nazis also altered Helena Blavatsky’s – the founder of Theosophy – Six Root Races theory to allot more value to the Aryan race than she did and Friedrich Nietzsche’s theory of the Superman, for Nietzsche never expresses that such being had to be Aryan or German.

While the Nazis had a particular abhorrence of Christianity because of this religion’s roots in Judaism and its forgiveness as well as self sacrifice preachings, they had no scruples in searching for Christian relics and artifacts whose mystic powers could be use to further their ends.

One such relic was the so called Spear of Destiny, which was supposedly used to pierce Jesus’ side on the cross. While there was no public display of interest in it, many historians think that Hitler believed that possessing the spear would assure Nazi domination of the world and victory over Christianity.

A search for the Holy Grails was also undertaken. To the Nazi leadership the Holy Grail was not the cup used at the Last Supper, but a powerful weapon they could use. The infamous SS was also modeled on the orders of the Templar and the Jesuits. It is not understood why the Nazis thought the God of their enemies would help them.

In addition, from his youth Hitler claimed to hear divine voices that told him he was the German people’s Messiah.

Many of the important Nazis, like Minister of Armaments and War Production Albert Speer and SS Chief Heinrich Himmler were fanatical believers in geosophy and ancient Teutonic rites. Himmler, in particular, also believed in karma, reincarnation, runes and the teachings of a skeptical, unscrupulous Hindu philosophy expressed in a 4th Century B.C. work , the Kautilya Arthasastra.

Apparently the maltreatment took place for two reasons: to prevent the public from knowing of the leadership’s involvement with such concepts and, simply, as way to get rid of possible rivals.

The Allies, for their part, also had the benefit of occult practices. A cove of witches from Coventry placed an invisible circle of protection around Great Britain during the war, but if failed to protect the isles from being bombed.

The Antikythera Mechanism: A 2,000-year-old Computer