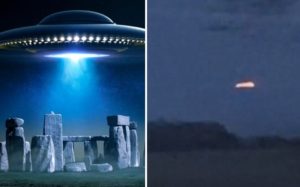 Wild theories about Stonehenge have been around since the Middle Ages.

One of the most bizarre explanations for its existence is that it is a spacecraft landing pad for an ancient alien species.

Now conspiracy theorists believe those aliens have returned, following the appearance of a mystery UFO.

“On our way back from Devon, we noticed a big bright light in the sky to the left of the A303. It was orange and very bright artificial lighting. We shot for about 3 minutes and then the UFO just disappeared”, the eyewitness stated.

There have been dozens of sightings at Stonehenge, including one which came out in recently declassified government documents described as ‘Britain’s X-Files’.