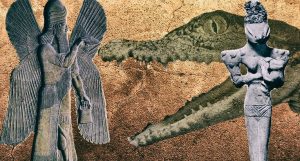 Sumerian riddles and an ancient culture with bizarre reptilian statuettes hint at an alternative vision of humanity’s history.

So many times we have wondered about humanity’s true origins. Are we a product of the natural laws of evolution? A fortunate dance of particles that assembled into conscious beings able to perform the most amazing tasks?

Or we were rather engineered by a greater force, be it God or some other advanced beings we call aliens or deities? Alas, there is also the holographic universe hypothesis which we can only attribute to another influential force that stands beyond our current understanding.

Such scenarios have really made our species confused or even paranoid, but this is also what made us progress. By questioning our very nature we’ve expanded technology ,which in turn is another way of looking at reality and the world we live in.

While some find science to provide all the answers, I find reality much too complex to be seen only through this lens. To venture near humanity’s true origins and purpose, we must seek the truth from all perspectives we have at our disposal. As a prime example, let’s search through history and correlate it with science.

Summer is frequently called the cradle of civilization. Archaeologists found vast remains of this ancient culture that stretches back more than 7,000 years, when the Sumerians are believed to had established in Mesopotamia – “the land between rivers.” Here they formed a complex culture with an advanced writing system, magnificent arts and architecture, astronomy and mathematics. 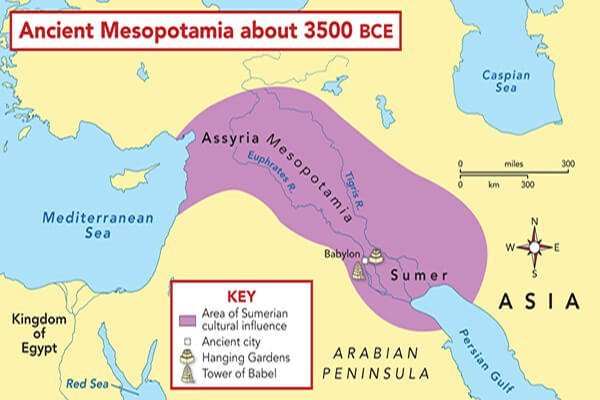 Summer was comprised of many city-states that surpassed the test of time for about 3,000 years, an amazing feat if you look at the rapid shift undergone by human societies today.

These cities were also regarded as independent nations and contained public buildings, an advanced water system, markets and workshops, while their surroundings were filled by agricultural landscape and other villages.

Until human aversion started to manifest, the political power in their society belonged to the citizens, but because of climate change and human nature they soon turned to the institution of kingship. Nevertheless, the Sumerians left an astounding heritage from which I remind the following:

– One of the earliest known writing system defined by cuneiform inscriptions, where writers made the symbols using a pointed instrument known as a stylus which they pressed on wet clay tablets that were afterwards dried in the sun to preserve the text. Hundreds of thousands of these inscriptions have survived, thus providing a rich understanding of their culture.

– The Sumerians are credited with the first texts of law, a lunar calendar, the sailboat and the plow. Another feat is the creation of a numerical system that’s based on the number 60, a rule that applies even today when measuring seconds and minutes.

– The Sumerian King List, an artifact written in the Sumerian language which sequences all the kings of Summer (ancient southern Iraq,) together with their alleged reign lengths, and the locations of their kingship.

What makes this ancient manuscript so controversial is the fact that it encompasses a prolonged dynasty of rulers stretching back to a time just after The Great Deluge (around 10 – 12,000 B.C.), but also before this great mythological event.

The list is similar to the Egyptian inscriptions which present a dynasty of pharaohs up until the Gods descended upon the Earth from heavens. However, conventional science doesn’t lend credit to these mystical rulers because no archaeological evidence were found so far. 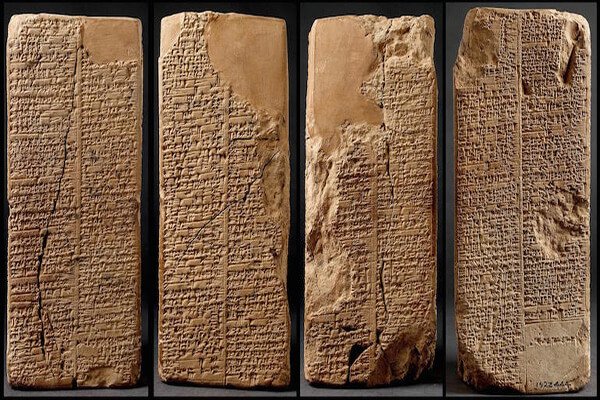 – The Epic of Gilgamesh, an epic poem in cuneiform script dating back to the early 3rd millennium BC. In it’s narrative, the mythological hero-king Gilgamesh, and his half-wild partner Enkidu, partake in an endeavour to seek the secret of immortality. Throughout their adventures, as the epic depicts, the two encounter a great flood that’s extremely similar to the Biblical story of Noah and the Ark, a narration that’s also found in various other cultures.

– Ancient Sumerian texts that depict the origin story of human beings were found inscribed on a tablet in Nippur, a timeworn Mesopotamian city founded more than 7,000 years ago. The story tells of a time before the great deluge when human-like gods descended on Earth to look for gold in order to mitigate their problems. Upon their arrival, they strove to make the area habitable while also mining for the precious mineral. You might know them as the Anunnaki.

Cheesed off because all all the hard labor they had to put, these superior beings decided to create man to work in their stead. Anu, the god of gods, entrusted his son, Enki (or Ea,) and his half-sister Ninki, to engineer this slave race using a god they had slew in order to mix his body and blood with clay. Thus the first human being took shape, in likeness of the gods.

With this achievement, Enki and Ninki took over the role of parents of this new species, and because of the harsh conditions their creation had to endure, the two decided to make a better version of man. Thus, Adapa was made, a fully functional human being that was able to reproduce and question authority.

Because this deed was performed without the approval of neither Enki’s brother, Enlil, nor Anu, a conflict quickly escalated between the gods. Enki and Ninki were banished by their own species, and the human kind was almost destroyed in a great flood. However, the newly created specimens survived with the help of their creators, and managed to flee the world and reproduce.

To understand who these godlike beings were, and how they were similar to human beings, we must search even further in time, as far back as archaeology permits us. In this sense, let’s have a look at one of the ancient cultures that predates the Sumerians.

The Ubaid culture and the reptilian mystery

In 1919, archaeologists had brought to light numerous pres-Sumerian artifacts depicting a humanoid embodiment of reptilian creatures. The figurines had elongated heads, almond shaped eyes, long tapered faces and a nose characteristic to lizards.

Among the most baffling of statuettes is a reptilian female breast-feeding her suckling. According to archaeologists, this suggests these were no ritualistic objects and their purpose remains an enigma even today.

The site at Al Ubaid is a small mound half a kilometer in diameter located near the Persian Gulf. A variety of male and female figurines were found here, but also at sites of Ur and Eridu. Some of these artifacts wear a bizarre helmet and have some sort of padding on the shoulders. Others hold scepters, probably as a symbol of wisdom, power, or ruling. 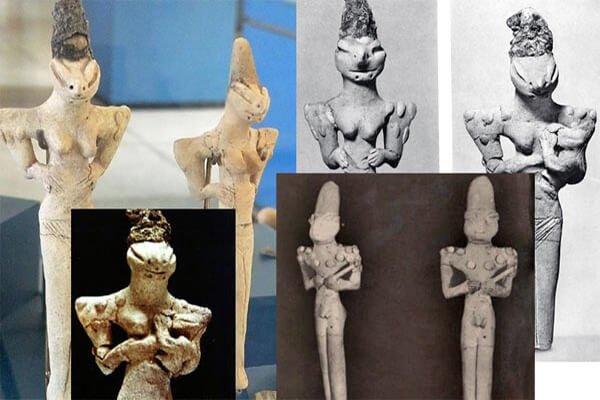 It appears that the Ubaid culture originated on the flat alluvial plains of southern Mesopotamia (ancient Iraq) around 6,200 B.C. and had spread to the north and gradually replaced the Halaf culture. The heritage left behind by these ancient peoples (Ubaid and Halaf) are as far as archaeology can stretch in time, speaking from a palpable point of view.

Among the numerous baked clay figurines with ornaments and lizard-like heads found at Ubaid sites, other artifacts were left behind, such as pottery with complex designs, clay tokens, pendants and stamp seals depicting various animals.

The first identifiable villages originate from this period and place in time, and these sites are further known to have evolved into towns and monumental buildings, such as Eridu and Uruk of the Sumerians.

Who these people were and why they had integrated the reptilian figurines into their culture remains an enigma as of today. If archaeologists will crack this mystery anytime soon remains to be seen, but I’d rather rely on speculation and individual research to get my answers straight.

Piece by piece, humanity’s forbidden history is coming together for those who keep an open mind. What’s actually real might hop us off the boat of rationality, but knowing the truth about our past should offer relief to most of us who seek to understand humanity’s origins.