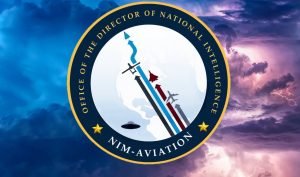 The UFO community is rejoicing after the US National Intelligence Manager for Aviation (NIM-A) revealed a bizarre new logo that appears to recognise what believers have been saying all along. They know that aliens are out there.

The new logo, which is increasingly looking like it might be real, shows several airborne craft, including what appears to be a UFO.

The new seal can be found on the website airdomainintelligence.mil, which carries the same “.mil” domain as any official U.S. military website — but a number of questions have been raised about the veracity of this website and the seal it depicts.

This unusual new seal began making the rounds on social media on Saturday. One of the earlier accounts to draw attention to it belongs to UFO researcher Jeremy Corbell, though it was first brought to our attention by Twitter user Richard Bejtlich.

A spokesperson there told CyberScoop in an emailed statement that its National Intelligence Manager for the Air Domain, also known as NIM-Aviation, “erroneously posted an unofficial and incorrect logo.”

This August, peculiar wording was included in an intelligence budget report suggesting some UFOs weren’t man-made. The phrasing instructed officials to focus their attention on spotted unidentified aircraft that were confirmed to be not be made by known sources.

“Temporary nonattributed objects, or those that are positively identified as man-made after analysis, will be passed to appropriate offices and should not be considered under the definition as unidentified aerospace-undersea phenomena,” the report said.

After the report surfaced, a former Department of Defense staffer wrote in an op-ed that the verbiage suggests officials know there are some UAP not of this planet.

“It strains credulity to believe that lawmakers would include such extraordinary language in public legislation without compelling evidence,” Marik von Rennenkampff said in the op-ed.

“This implies that members of the Senate Intelligence Committee believe (on a unanimous, bipartisan basis) that some UFOs have non-human origins. After all, why would Congress establish and task a powerful new office with investigating non-‘man-made’ UFOs if such objects did not exist?”

Plesiosaurs also lived in freshwater, supporting the theory about Nessie