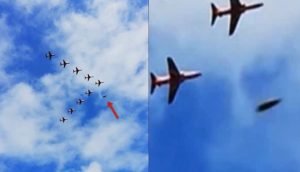 On August 28, 2021, during an international air show in Thamesford, Ontario, Canada, a fast UFO flew past the Blue Angels and now on September 19, 2021, a similar incident occurred when the Red Arrows performed an air show in Chorley, England.

As with the UFO in Canada, this UFO in England also has no wings or visible propulsion.

What is going on? Why do these objects appear during air shows?

Fastwalker is a code word to classify unidentified flying objects which approach our Earth from space and enter our atmosphere.

It has been reported that from its subterranean facility deep inside Cheyenne Mountain Colorado, USA, the Air Force NORAD facility tracks a rough average of 500 of these Fastwalkers each year.

Nobody knows what it is or who it is.

A UFO was again spotted over Popocatepetl, creating a strange portal