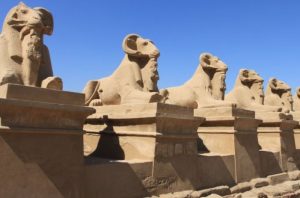 Experts from the archaeological mission of the Ministry of Antiquities of Egypt during excavations in the ancient city of Luxor, near the gate of the Karnak Temple, found 3 figures of sphinxes. The creatures were found to have chipped ram heads, writes Ahram Online.

The figures were found near the so-called Sphinx Alley. It is believed that in ancient times this road, almost three kilometers long, led from Luxor to the gates of the Karnak temple.

The Sphinxes were found in the southern part of the temple, right at the gate. Scientists are now working to restore the figures.

According to archaeologists, in ancient times, these statues also stood along the avenue of the sphinxes, among other figures.

After restoration, scientists plan to return the ram’s heads to the bodies of the sphinxes, and put the figures on public display. Also, the researchers are going to organize an exhibition dedicated to the history of this alley and tell visitors about it from the moment of its discovery to the present day.

According to myths, the sphinx is a zoomorphic creature. In Egypt, they were most often depicted with the body of a lion and a human head. But scientists also know specimens with the heads of a ram and a falcon.

Similar creatures were mentioned in the myths of Ancient Greece, but there they had more elements from various living creatures – the body and paws of a lion, the head of a man, the tail of a bull and eagle’s wings.