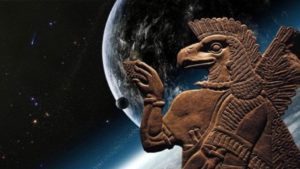 It is commonly believed that man first evolved into what we are today, both physically and mentally, and organized into a civilization, somewhere in Africa. It’s for this reason that Africa is known as “The Cradle of Civilization”.

In fact, recent aeriel photographs have revealed that these early settlements were even more organized and expansive than we ever imagined. However, this begs the question: Did we do it ourselves?

How did early man, fresh off the evolutionary jump from Homo Erectus (walking gorilla Homer Simpsons) to modern Homo Sapiens Sapiens, create expansive civilizations, complete with deep shafts for mining gold and an organized agricultural system? The answer to many: They had help from above. The “above” they speak of? Outer space. And the help is thought to have come from humanoid extraterrestrials from “Nibiru”, a planet within our very own solar system.

In Zecharia Sitchin’s acclaimed work Twelfth Planet, he became the first person to pose the theory that “Planet X” (a planet never discovered, but theorized by astronomers as a reason for certain gravitational and orbital anomalies amongst the discovered planets) is actually “Nibiru”.

Nibiru, which possesses a long, elliptical orbit that causes it to only pass through the inner solar system about every 3600 years, is also believed to have created the earth when it collided with “Tiamat”. Tiamat, a planet believed to have existed between Mars and Jupiter, is thought to have split it into pieces upon the collision, and one of those pieces became our planet.

According to Sitchin’s interpretations of Mesopotamian lore (Mesopotamia is the region in which ancient Sumeria or Sumer was located in what is now Iraq), Nibiru was home to an advanced culture of humanoids known as the Anunnaki, and it’s the Anunnaki who are responsible for Sumeria and it’s surrounding areas becoming so advanced so quickly. They apparently set up their headquarters in this region to take advantage of the excellent agricultural possibilities.

It’s believed that on one of Nibiru’s passes through the inner solar system, the Anunnaki, with the aid of both space-crafts and possibly stargates, came down to our primitive planet to search for minerals, particularly gold.

Upon finding the best gold deposits in southern Africa, they set out upon the task of mining it. The indigenous population at the time consisted of animals and primitive proto-humans; who revered the Earth bound Anunnaki as gods.

Eventually, the working class Anunnaki that were stuck here on earth got tired of performing the grueling labor that is mine work, and revolted against their leaders. In order to restore peace to their society, their leaders needed to find a new source of labor, and the Anunnaki on Earth had the perfect candidates: humans.

However, in their current state of evolution, they couldn’t perform the tasks of the Anunnaki workers, so the Anunnaki decided to give humanity the “jump start” it would need to do their work for them.

We discussed how they, a race of humanoid extraterrestrials from the planet Nibiru, had come to primitive Earth in order to mine gold. However, in order to quell a rebellion amongst their working class, their leadership had to find a new way to get the grueling labor of everyday mine work done. Their solution was primitive man, but Homo erectus as he’s come to be called, was not smart enough or strong enough to get things done, so the Anunnaki had to kick man’s evolution into high gear.

How did they do so? Well, they just injected some of their DNA into the equation. The Anunnaki decided to play the part of the gods that most primitive humans already thought they were, and created new life through crossbreeding.

The accounts of how the crossbreeding was carried out vary. Some say that Anunnaki males, already infatuated with the purity and beauty of Earth’s women, impregnated them and that their children were the first Homo sapiens, from who we are all descendants.

Other accounts say that the Anunnaki took the seed of men and implanted it into some of their women, who in turn gave birth to our current evolutionary incarnations. These theories vary depending on the theorist’s view of the Anunnaki. 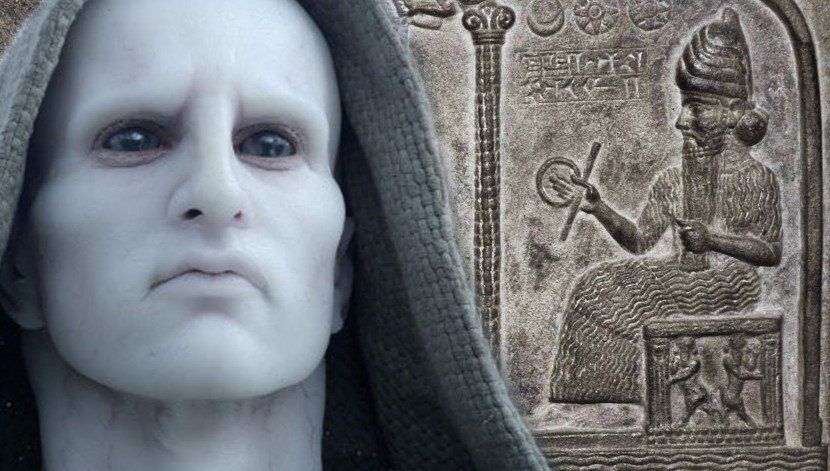 Some believe that the Anunnaki were a cruel and dictatorial race, that enjoyed enslaving men, genetically engineered entire species just for fun, raped our women, and created all of our religions and all of their doctrines (the Bible, the Koran etc.) just to shape our social development to their ideals.

The people in that camp tend to believe that Homo sapiens came from Anunnaki impregnating earth women. On the other side of the coin, it is believed that while the Anunnaki weren’t exactly the nicest species in the universe, they had some sympathy and love for humankind and chose to carry our next evolutionary step in the wombs of their Queens.

Both factions share some beliefs, such as the Anunnaki being responsible for religion, and their tampering with our gene pool for the benefit of their workers, but one side clearly has a more sinister view of our “ancestors”.

So now that the Anunnaki had made an entire new race to work their mines, they ran into the same problem that any business with a lot of workers would run into: controlling their work force. To do so, the Anunnaki took early man’s idea that they were gods to the next level, and began to act as if that was the case.

They installed the most intelligent of the humans as Kings and other forms of royalty, and had them run their work force for them. The idea that early kings were following divine orders is believed to come from the Anunnaki (viewed as “the gods”) giving their orders to them so that they could pass it down to their subjects (the working class).

How did they then get their product? Simple, they were paid “tributes” of gold and whatever else they wanted in exchange for knowledge, technology, and not destroying us. Again, the two views of Anunnaki conflict, with one side thinking this was all done so that even after they no longer visited the earth, the Anunnaki’s influence would be felt, while the other simply sees it all as a sort of business strategy. Maybe, like we do, they had many individuals and groups competing for a variety of interests, good and bad.

It’s clear that the story of the Anunnaki makes sense, and was well thought out, but is there any proof? What do the scholars that came up with these theories point to as their proof that they existed and influenced us?

The story of this creation has been repeated in popular culture, most notably in the film Stargate, and from a writer’s perspective, it’s well written and makes sense, but where’s the proof? Where did people like Zecharia Sitchin get their ideas?

Well, they got them from a lot of places, most notably they got their physical evidence from the ruins and artifacts of Mesopotamian, Sumerian and other cultures, while their evidence in the form of documentation was taken from religious texts the world over, including, the Bible.

The “religious” or “mythical” texts that have been found tell incredible stories but the academics will debate their true meaning for eons to come. A lot of physical proof that the Anunnaki existed is the same proof that many point to whenever the subject of “ancient aliens” is brought up.

Structures like the great pyramids of Giza, stonehenge, South American ruins and the statues on Easter island are immediately brought up. These constructions have such complex designs and scope that it seems like primitive man just didn’t have to technology or engineering know-how to create them.

In particular, the depictions of the “gods” on Easter island, with their large, oblong heads, leads many to believe that these were actually statues of the Anunnaki. There’s also “proof” of Anunnaki existence and influence in Sumerian and Mesopotamian etchings, which depict creatures that look not-quite human and seem to insinuate that they are from the stars.

Other etchings show the “gods” creating man in what appears to be a primitive laboratory, lending further credence to the idea that Sumerians knew they were created by the Anunnaki. Even more “proof” can be found in the layouts of the civilizations themselves, which were again, far larger and more complex than it’s believed humans, still in their infancy as a species, could have created.

The civilizations were also laid out in patterns similar to celestial bodies, a fact that has led many to believe that they were a laid out that way as markers and guidance mechanisms for visitors from above.

Further evidence of Anunnaki presence can be found in Egyptian wall etchings that seem to show light bulbs, other technologies, as well as some understanding of the double-helix structure of human DNA.

Physical “proof” that Anunnaki had significant influence over early humans seems to be in abundance, but the proof that lies withing the written word seems to be even more convincing. It is widely believed that the “Nephilim” (giants) referred to in the bible, are actually the Anunnaki.

Of particular interest to Zecharia Stichin was that stories of Nephilim (“the sons of god”) mating with human women (“the daughters of men”); stories which he sites as his proof that even the Bible admits to the existence and crossbreeding of the Anunnaki.

This extends into another idea brought forth by believers that any reference in the Bible to Angels, is actually referring to Anunnaki. Furthermore, theorists point out that Sumerian lore refers to their gods as Anunnaki, and draw the simple conclusion that all of their stories about their gods are literal. Therefore, these are not religious texts rife with metaphor, but are historical accounts of the Anunnaki’s interactions with man.

Knowing the story of the Anunnaki and their believers, you have to ask yourself: Did we humans evolve on our own? Or did we have help from above? Is the evidence just liberal interpretations of ancient artifacts and texts?

Or has the truth been staring us in the face for centuries? No one knows really, but it’s all possible. So next time you get that feeling we all get sometimes that you’re different, that “alien” feeling, just think: maybe you are.

The Day The Apollo Astronaut Admits ‘The Alien Threat Is Real’