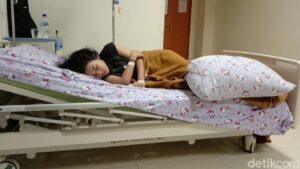 Back in 2017, this girl became a real mystery for doctors when she suddenly fell asleep for 13 days. Recently, she again had many days of sleep without awakening and the doctors still do not understand what is happening to her.

A 17-year-old Indonesian girl has been nicknamed “Sleeping Beauty” due to a rare and poorly understood syndrome that can cause her to sleep for days in a row.

A girl named Echi first hit local news back in 2017 when she slept for 13 days in a row without the slightest risk to her health.

In subsequent years, Echi no longer had such long “hibernations”, except for two incidents when she slept for a day and a half, but recently she fell asleep and slept without interruption for 9 days.

Echi’s frightened parents, after 7 days of hibernation, took her to the Ansari Saleh hospital in Banjarmasin, but all the tests taken there showed no abnormalities.

On the ninth day of sleep, the girl finally opened her eyes, but the doctors say she is still very weak to start a normal life.

No one really knows what causes Echi’s unusually long sleep, but her symptoms suggest that she suffers from hypersomnia , a very rare neurological disorder that causes sufferers to feel excessively sleepy during the day and fall asleep for extended periods of time.

Hypersomnia comes in many forms and can have a variety of causes, from neurological damage to genetic factors and physical or emotional trauma.

Muladi, Echi’s father, said that they repeatedly tried to wake the girl up during her sleep, but to no avail. At the same time, interestingly, they managed to successfully spoon-feed the girl during her sleep.

Another curious fact is that when Echa begins to feel the urge to go to the toilet in her sleep, she becomes restless, although she does not wake up, but this is enough so that her parents have time to take her to the toilet and put her on the toilet.