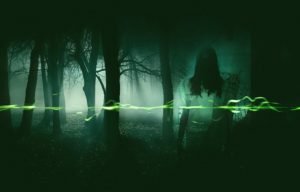 The study of electronic voice phenomena (EVP) has become increasingly popular in recent years, finding an audience among “ghost hunters” as well as other researchers of paranormal activity.

Electronic voice phenomena are defined as voices of mysterious or unknown origin that have been captured by any type of electronic recording device. EVP-related sounds are commonly found in recordings that contain background noise, static, or various radio transmissions, and can often be produced by amplifying the sensitivity of audio recording devices.

EVP enthusiasts claim that these odd sounds are of paranormal origin, while skeptics argue that EVP can be explained away by such causes as apophenia (the attempt to find significance in random information), auditory pareidolia (perceiving coherent communications in random sounds), equipment artifacts, and deliberate hoaxes.

Electronic voice phenomena was popularized by two parapsychologists named Konstantins Raudive and Hans Bender. Their investigations into EVP led to the publication of a book in 1971 authored by Raudive entitled Breakthrough.

Roughly seven years prior to the publication of Breakthrough, Raudive had become fascinated with the subject of EVP after reading a book entitled “Voices from Space” by Swedish filmmaker and author Friedrich Jurgensen.

Raudive was so impressed by the book that he arranged a meeting with Jurgensen in 1965 in order to capture EVP recordings for research. Their first recordings seemed to be somewhat unproductive, as both of them believed that they were only able to hear very slight, nearly indistinguishable voices.

After poring over one particular audio recording for a greater length of time, Raudive claimed that he began to hear a number of very clear voices in the background, in various languages such as Latvian, German and French.

The most significant voice heard on the tape, according to Raudive, was a woman’s voice near the end of the recording that said “Va dormir, Margarete” (French for “Go to sleep, Margaret”). Raudive would later write in his book Breakthrough that it was this sound that made the deepest impression on him, as Margarete Petrautzki had just recently died from an illness.

Raudive subsequently began to conduct his own research on EVP, working with Bender as well as an extensive team of audio recording experts and assistants. He spent the last 10 years of his life exploring the phenomenon and producing well over 100,000 audio recordings. The majority of the over 400 people who worked with Raudive over the years claimed to have heard voices on the recordings as well.

Many adherents of the Spiritualist movement (circa 1840-1920) believed that the emergence of various technologies such as photography and audio recording would give human beings a new way to contact the spirit world, including communication with the dead.

In 1941, an American photographer named Attila von Szalay began to conduct various experiments with photography in an attempt to capture ghosts on film. He also used audio recordings on 78 rpm records in hopes of capturing the voices of the dead.

Once von Szalay switched to a reel-to-reel tape recorder in 1956, he claimed to have successfully recorded several voices and sounds from discarnate spirits. Working with psychologist Raymond Bayless, von Szalay constructed an audio recording apparatus that featured an insulated cabinet and microphone connected to an external speaker and recording device.

After several recording experiments, von Szalay claimed to have captured a wide range of voices that were not heard through the speaker during the actual recording session. He believed that these sounds were the voices of disembodied spirits.

The first person to create an official organization dedicated to EVP research was Sarah Estep, who in 1982 established the American Association of Electronic Voice Phenomena (AA-EVP).

Estep personally began researching electronic voice phenomena in 1976, and claims to have a large collection of audio recordings featuring messages from deceased relatives and friends. Estep also claims to have been contacted by extraterrestrials from other dimensions or planets by way of EVP.

Scores of other paranormal investigators and enthusiasts have attempted to capture EVP using various recording devices, with portable digital recorders being the current device of choice for their endeavors.

Since many of these devices are subject to radio frequency (RF) contamination and interference, many EVP researchers attempt to record in sound-screened studios. Skeptics of EVP believe that practically all of the observable phenomena put forth by EVP enthusiasts as evidence can be dismissed or explained away by natural causes.

Examples of this include anomalous interference or cross-modulation from other electronic devices in the area, or scattered radio signals due to obstructions in the atmosphere such as meteor debris.

Unfortunately, EVP suffers from a lack of official scientific research, but it has doubtlessly become a cultural phenomenon, providing paranormal-themed fodder for movies such as Poltergeist, White Noise and The Sixth Sense.

Popular television shows such as Ghost Hunters and Ghost Adventures have also featured episodes that explore the topic of EVP, documenting teams of people who search for audio or visual evidence of ghosts in reputedly haunted locales. Regardless of any evidence for or against EVP, the intrigue and mystery of possibly contacting a world beyond our own continues to enthrall and captivate people all over the world.