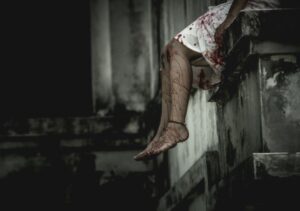 This story is particularly dark. If you have a low tolerance for extremely disturbing subject matter it is not advised you read this! WARNING!

At 10pm on August 28th, 1922 Ethel Geller Yeldem was preparing to step onto a streetcar at the southwest entrance of the Ohio State Fairgrounds. As she was doing so she noticed a small rectangular case lying on the curb.

Once settled into her seat she opened the box to find it contained a very expensive looking pair of eyeglasses. Ethel wanted to do the right thing, so she set out in search of the spectacle’s owners.

She answered lost and found ads then placed and posted one of her own. After some time had passed without an owner coming forward, Ethel reasoned the glasses had belonged to a visiting fairgoer and, with further attempts to reunite object with owner seeming futile, tucked the glasses away in a drawer and, thusly, put the matter to bed.

It should only seem fitting that Ethel attempted to return the spectacles – just as love and companionship were returned to her by an attractive Native American laborer named Darby Yedlem in the year following her first husband’s fatal heart attack.

To say that the couple’s marriage was an intimate one would be an understatement. Ethel was in a state of perpetual pregnancy since their wedding and, if truth be told, even a couple of months beforehand.

Together the two spent the next seven years filling their modest west side home to the rafters with the same number of children. Add to the total another four kids from her previous marriage and you can imagine what an exhausted woman Ethel must’ve been and how chaotic the household.

Then, in 1925 things began to go badly for the Yeldems. Very badly.

It started when Ethel discovered that Darby had been molesting her eldest daughter, Mildred. During his trial it was also revealed that Darby was actually African American rather than Native American and that his true last name was Medley. He had spelled his last name backward and lied about his ethnicity in an attempt to conceal his previous criminal record.

As these events were coming to light Ethel was struck another blow when her ten month old infant, Walter died of cholera infantum.

1926 wasn’t any better. In July of that year eight year old Elaine ran into the street chasing a ball and was hit by a car. Her skull was fractured and six of her ribs were broken but in time she recovered. That December Darby was finally sentenced to ten years in the Ohio Penitentiary for sexually abusing Mildred.

While this must have given the family some solace, it also meant Ethel had to find a way to survive on the meager earnings she was able to draw by washing clothes and selling newspapers on the corner of State and High streets.

Incredibly, her daughter Mildred not only held academic and athletic honors throughout the trauma and turmoil but she was also able to help support the family when she was hired at Mount Carmel Hospital as a student nurse. If only that were all she would have to bear.

Looking back, spring couldn’t have been a happy time of year for Ethel. It was in April of 1918 when her first husband, Otto, suffered a fatal heart attack while cleaning a broiler at the Jeffery Manufacturing Plant in Italian Village. It was in March of 1919 that she married Darby Yeldem.

It was in April of 1925 that Darby raped Ethel’s thirteen year old daughter Mildred. It was in May of 1928 that the police returned ten year old Vernon after he had walked all the way to Dayton to get away from the home his mother worked so hard to provide for him.

By the first week of May 1930 the struggle to raise her family became a strain too great for Ethel. On the morning of May 6th she told a neighbor that they may have to stop what they’re doing and go to Green Lawn Cemetery soon as she was about ready to give up. The neighbor didn’t take the comment seriously and told her to “brace up.” 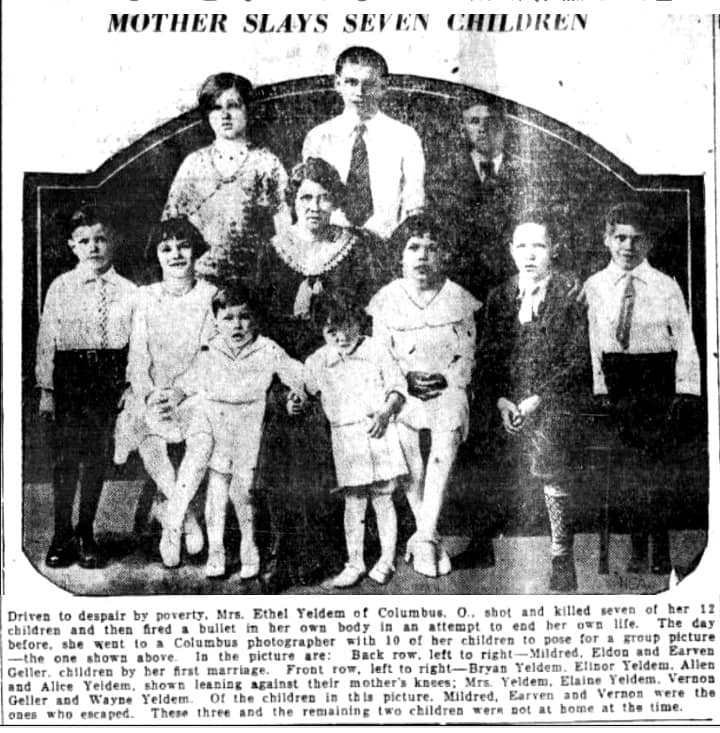 That day was a novel one for the Yeldem children. Despite the family’s tight budget Ethel bought them each new dress clothes and rather than go to school they travelled by taxi to Baker Art Studio where they had a family portrait taken.

Afterward they returned home and had an uncharacteristically extravagant meal. Following dinner Mildred left for work at Mount Carmel Hospital and the other two children from Ethel’s first marriage, Vernon and Ervan, were sent to see a movie at the Ohio Theater.

Around 4pm a neighbor came over to use the telephone and noticed that Ethel seemed worried about something. She also noticed that Ethel was throwing away the uneaten remnants from supper, an unusual thing for someone in her financial position to do.

After the neighbor left Ethel told the children that they were going on a vacation the next day and that they would need to retire early that evening in order to get proper rest for the trip. Ethel then instructed the children to wait until she called them each to come upstairs and prepare for bed.

One at a time each child climbed the stairs where their mother bathed them, dressed them in their nightgowns, lovingly combed their hair and then picked up a rifle wrapped in a towel and shot them through the heart. After murdering each child she carefully laid their bodies out on mattresses in the front bedroom.

The last child to go upstairs was ten year old Elaine. Once she realized what was happening she somehow managed to escape through a window onto the roof of the back porch.

A group of boys playing baseball in the vacant lot next door saw Elaine, clad only in her underwear shouting “Murder! Murder! Mother is killing all of us!” Then they saw the woman’s arm reach out to grab the screaming girl and drag her back into the house through the window. Thinking Elaine was just getting a “licking” the boys shrugged and continued with their game.

Moments later Mildred returned from work and heard crying coming from upstairs. When she called up to see if everything was ok Ethel replied that she had just punished one of the younger girls. Then she asked Mildred to run to the corner store for stamps.

No sooner had Mildred left than Ervan returned from the theater. As he walked in the door he heard pained moaning coming from the second story and rushed up the stairs to see what was wrong. There he found his mother still alive but with her shirt covered in blood from a bullet wound to the chest and a rifle by her side. Also in the room was the dead body of his little sister, Elaine.

Instinctively Ervan ran to shout for help from the window of the front bedroom. The horror which awaited him there was beyond his imagining. The sight of his six youngest siblings bodies laid out upon the beds was nearly paralyzing.

As he fought to scream for help through tears and gasps of air, Mildred stood outside, the book of stamps slipping from her hand onto the sidewalk as she processed what she was hearing.

Once the police and ambulances arrived it was discovered that Ethel had left the following note:

Don’t think too hard of mother for this please. Just always try to do what is right. Listen to older advice. It will always be for your good what is told you. I am so tired I can’t go on and no one to take care of the rest is why I take them with me. I want you to go to church, do as you are told and try to live this down.

But Ethel didn’t die. The bullet had come close to but missed her heart and doctors were certain that in time she’d make a complete recovery. Police detectives begged her to talk but she refused to answer questions and would only utter barely audible pleas to be left alone.

On May 8th, as her seven slain children were being lowered into their mass grave at Union Cemetery, she thrashed about her hospital bed in anguish. The two youngest children, three year old Alan and Alice were buried together there in a single casket.

On May 16th Ethel complained of chest pains then moments later got her final wish in spite of her prognosis and died from internal hemorrhaging. She was buried beside her children in Union Cemetery. Plans to erect a tombstone at the grave were never materialized and today it appears as an empty patch of grass.

After the tragedy it was discovered that Ethel had written a letter to Darby informing him that she was going to kill their children but it’s delivery was slowed by the Penitentiary’s mail vetting process and it wasn’t received until far too late.

In 2012 the house where the murders occurred was demolished as part of the city’s Vacant and Abandoned Property Initiative. Today only the concrete steps remain as a subtle reminder of the house that once was there, where the desperation of not having enough drove an otherwise loving mother to do the unthinkable.