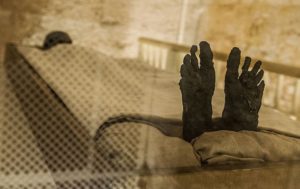 Through the joint efforts of Egyptian and English scientists, the first scientific reconstruction of Pharaoh Ramesses II, a representative of the 19th dynasty and the ruler of Ancient Egypt for 66 years from 1279 to 1213 BC, appeared.

With the help of computed tomography of his 3D model of the skull and the available anatomical data, it was possible to accurately recreate the facial features of the ancient ruler.

The reconstruction showed the pharaoh at the age of 45 and 90. A scientist from Cairo University, Sahar Salim, while studying the reconstruction, noted that Ramesses II was a rather handsome man.

Reconstructing the face of #RamsesII , the most powerful pharaoh of Egypt who lived 3500 years ago, using computer tomography of his skull at John Moser University of Liverpool.
This is the real face of #RamessesII pic.twitter.com/wLec9W6i4K

“The way Ramesses II was supposed to look was influenced by the appearance of his mummy, but we managed to create a truly living face. The pharaoh looks exactly the way I think he was, with a pronounced nose and a strong jaw.

“Initially, we are dealing only with a mummy, but when we recreate a face, especially such a pharaoh, we make it more human, that is, it is not just a dead mummy’s face,” he said.

Caroline Wilkinson of Liverpool John Moores University said that all people have approximately the same facial muscle structure. Thanks to this, it was possible to recreate the muscle structures, fat layers and skin layer applied to the simulated skull.

However, it should not be assumed that the implementation of the reconstruction was an easy task. In particular, with the help of the skull it is impossible to lift the veil of all aspects of a person’s appearance.

Therefore, the experts used preserved historical data and mummified soft tissues to recreate the most likely color of eyes, hair and skin. According to Salim, in the end, they managed to carry out the first and only scientific reconstruction of the body of Pharaoh Ramesses II, based on a CT scan of his real mummy.