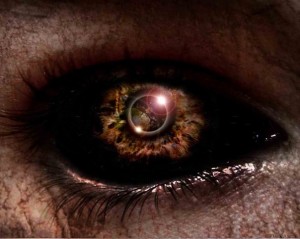 They’ve always said that the eye is the window to the soul. Perhaps the real truth is that it is the window of intent. When you drive on the highway and get cut off, the first thing you do is give a sharp glare at the offender, though some of us choose to complement it with a colorful hand gesture.

We use our eyes to correct misbehaving children, we shoot a look of incredulity when someone says something ridiculous, and we even advise our friends and family to “always look him in the eye” when we go to job interviews. The eye is our most powerful organ (though I suppose this could be disputed) in social interaction. We are fixated on it, and we use it against others to show our emotion.

When used against us, we fear it because we know that it means something bad. Ancient tribesmen were terrified by the eyes of wild animals watching them in the forest; at any moment the creature could pounce, and in the modern world we still fear being watched. Our brains are designed to fear the eye. But does it have anything other than superficial power?

Folklore attributes the underlying power of the eye to envy. Coveting a neighbor’s property was thought to create the evil eye, intentionally or unintentionally. Eyeing the neighbor’s prized cow could have been at fault for its untimely death, looking enviously at a prime crop could cause it to wither, and seeing your neighbor’s wealth with envy could cause them to lose it.

Children were thought to be particularly susceptible to the evil eye, a belief arising from the numbers of unexplainable infant deaths before modern medicine identified their causes. A barren women could be blamed for bringing the evil eye on a child, subconsciously jealous that she could not have her own.

Folklorist and UC Berkeley professor Alan Dundes once made the case that the evil eye’s effects almost always involved withering, drying and death. This explains the remedies seen in many cultures which always seem to involve wetness. One remedy for countering the evil eye was the practice of washing the ground after a person with the eye had passed through, and the Jewish custom that fish were immune to the eye because they were always wet.

The evil eye is almost universal to human cultures. The Fins call it the bad eye, for the Arabs it is the eye of envy. In the Philippines its the devil’s eye, and in Portugal its called the bad gaze. Traditional among some Muslim groups is to state “Whatever God wills” as a method of warding off the evil eye, and testifying that only what God wants to happen will happen. Sailors in some areas of the mediterranean to this day paint eyes on their boats to counter the gaze of the evil eye and ensure a good catch.

In Turkey the symbol has even appeared as a large blue eye on commercial aircraft and on cellphones. Ancient Egyptians used the eye prominently in their symbolism to protect the spirits of the dead, and even the bible gets in on the action with the tenth commandment, with the word covet meaning to cast an envious eye. Its possible that the commandment itself might have been intended to prohibit casting the evil eye, rather than to simply be envious in itself, though I guess its better to be safe rather than sorry when interpreting this commandment.

The Romans made amulets in the shape of a phallus to ward off the evil eye, presumably by drawing its gaze away from the person and onto the absurdly large phallus they were prominently wearing around their neck. The latin term for this type of charm is a fascinum, from which the english verb fascinate derives. An odd variation of this concept is still alive today in the United States and Italy.

A common type of horn-shaped pendant seen in nearly every jewelry store in America is the cornicello. I’ve even seen them available at the local Walmart, and they remain one of the most popular gold charms on the market today. Sometimes called a ram’s horn, most people in the US that wear them have no idea what they are, other than an attractive shape. The origin of this odd piece of jewelry comes from Italy, and is intended to protect the genitalia – and consequently fertility – from the effects of the evil eye.

Medical science and objectivity tells us that the eye cannot kill, though for centuries deaths were often attributed to the evil eye. In medieval Europe witches were often identified – and burned at the stake – on the evidence that they had directed an angry glare at someone that resulted in their death. So frightened was the British court system of the evil eye and its bewitching powers that it required that accused witches being brought into the courtroom had to walk backwards.

Countless tales exist that attribute sudden death to the evil eye, and people to this day continue to derive lifelong employment in some parts of the world to removing its effects. Garlic is often said to ward off the eye, and the color blue is believed to counter it as well. But beware of blue-eyed people in Greece, as compliments from them can bring the effects of the eye onto you much more efficiently than brown eyes can.

King Alfonso XIII of Spain (r.1886-1931) was one of the most prominent figures of the 20th century to have been said to possess the evil eye. Benito Mussolini believed it, and refused to meet with him in person during a state visit. Apparently this was for good reason, since the Italian Navy’s demonstration celebrating the Spanish King’s visit to Italy in 1923 resulted in two sailors being washed overboard, an explosion on a submarine, an antique cannon fired in his honor blew up and killed its crew, and a navy officer who shook the king’s hand collapsed and died. To top it off, a dam broke killing 50 people during the visit.

There doesn’t seem to be any basis to the claim that the evil eye can do real physical harm. Any effect must surely be psychosomatic or coincidental. But with the myth of the evil eye being so widespread in human culture, even appearing in the most modern nations to this very day, one wonders why the superstition has such staying power. Every day some people fear to look us straight in the eye, some people go out of their way to do it, either way they are as focused on our eyes as the ancient’s were. In some small way, more mental than supernatural, the eye really does have power.