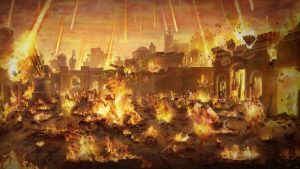 A new study suggests that the biblical cities of Sodom and Gomorrah were wiped off the face of the earth by a meteor shower that incinerated all 8,000 people who lived on their territory.

The same event could cause the fall of the walls of Jericho, which was located 32 kilometers from the two “cities of sin.” Express.co.uk writes about the work of scientists.

The fall of the meteorite devastated the northern shore of the Jordan Valley, leveling settlements over an area of ​​more than 400 thousand square kilometers.

Most likely, according to scientists, one of the large meteorites exploded in the atmosphere at an altitude of about 2.5 kilometers. This led to the emergence of a shock wave that moved at a speed of 1200 km / h. There were no survivors after this. Judging by the remains found, archaeologists believe that human bodies exploded.

The lead author of the study, Professor James Kennett of the University of California at Santa Barbara, notes that evidence was found at the site of a long-standing tragedy that the temperature here exceeded 2000 ° C.

For example, most of the materials containing sand have turned into glass. Archaeologists also found molten metal and grains of quartz at the site of the ancient city. In order to form this rare material, the impact of colossal force is necessary.

Historians emphasize that at that time there were no technologies that could imitate a natural phenomenon of such strength. Researchers also compare this event with the fall of the Tunguska meteorite in Siberia in 1908. Or the celestial event that led to the extinction of the dinosaurs, only on a smaller scale.

Sodom and Gomorrah were two legendary biblical cities destroyed by God for their wickedness. Their story parallels the Genesis flood narrative in its theme of God’s anger provoked by sin.

They are mentioned frequently in the prophets and the New Testament as symbols of human wickedness and divine retribution, and the Quran also contains a version of the story about the two cities.