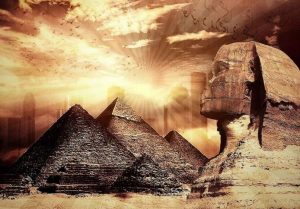 It is believed that the Great Pyramids were created about 4000 years ago by order of the pharaoh.

In addition to the fact that the pyramids were a visible manifestation of the power and omnipotence of the ruler during his lifetime, after his death they became monuments.

However, if the purpose of the pyramids is more or less clear to modern science, then the exact date of their construction is still unknown.

The pyramids are much older than commonly believed

Not long ago, engineer and science writer John Anthony West made a sensational statement. In his opinion, one of the most amazing structures on the Giza plateau is much older than we think, and it could not have been built by the ancient Egyptians.

The fact is that on the back of the Sphinx, West discovered furrows from streams of water – this suggests that Egypt once had a tropical climate. But now there has been a desert for many millennia. Therefore, the Sphinx is at least 7,000 years old.

Previously, it was believed that the Great Sphinx was built by order of Pharaoh Khafre, with whom the second largest pyramid on the Giza plateau is also associated. But after traces of water were found on the Sphinx, they began to look for them on the pyramids. And of course, they found it.

Examining the Cheops pyramid, the researchers found a hole at a height of two meters, inside of which everything was covered with shells. It is unlikely that the builders used a defective block for the construction of the base. The shells could only mean one thing – the base of the pyramid was in the water. And if so, then its age is at least 9,000 – 10,000 years.

The fact is that about 10,000 years ago, due to the rise in temperature, glaciers began to melt, as a result of which the level of the World Ocean rose by 70 meters.

It was then that water flooded the base of the Cheops pyramid for a long time. It is possible that the pyramids may be much older. But scientists are convinced that the Egyptian civilization originated 3.5 thousand years ago. However, the Sphinx and the pyramids have been on the Giza plateau for several millennia. Who then built them if not the Egyptians?

Several years ago, a cave was found in Ecuador, which was literally filled to the very ceiling with unique artifacts.

Among them was a stone pyramid, into which an eye was mounted. The pyramid is 27 cm high and consists of 13 steps. This artifact posed a serious mystery to scientists. The thing is that there really are pyramids in the Western Hemisphere, for example, the famous pyramid of the Sun in Mexico.

However, this and other American pyramids are different from the Egyptian ones. They have a different slope and structure. All of them are stepped, but the pyramid found in the Ecuadorian cave has smooth side edges, sharper angles of inclination, and looks more like an Egyptian one. The presence of an eye at the top of the pyramid is also surprising.

Neither for the ancient Maya, nor for the Aztecs, the image of the eye was not a significant symbol. Another thing is Egypt, the Eye of Horus, the most powerful symbol of Egyptian magic, which counteracts the forces of evil. The eye was also placed on the pyramid.

The thing is that the so-called pyramidion – a small stone in the form of a pyramid – was erected on top of the Egyptian pyramid.

In addition to the five white dots on the base of the pyramid, there were also ancient writings, which in translation mean “The Son of the Creator is coming.”

It seems that the pyramids were built by a civilization about which we know nothing at all. And this civilization was so powerful that it spread its influence over the entire planet.

Perhaps the study of its traces – the pyramids themselves – will help to learn more about this mysterious precivilization. But how to do that? Externally, they are well studied, but their exact internal structure is still a mystery.