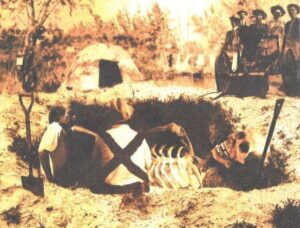 In the last few centuries, many strange archeological discoveries have been made in the Americas. It seems that people are unearthing extremely unusual and giant human remains. Many documented accounts of these findings exist.

Giant human remains are classified as any bones representative of a person between seven and twelve feet in stature. A human skeleton measuring 12 feet tall was unearthed at Lompock Rancho, California, in 1833 by soldiers digging a pit for a powder magazine.

The specimen had a double row of teeth and was surrounded by numerous stone axes, carved shells, and porphyry blocks with abstruse symbols associated with it. In 1856, a decaying human skeleton measuring 10 feet 9 inches tall was unearthed by laborers plowing a vineyard in what is now West Virginia.

A mound discovered near Toledo, Ohio in 1895 held 20 skeletons; they were seated and facing east with jaws and teeth “twice as large as those of present day people.”

In 1928, a farmer digging a pit to bury trash near Waterproof, Louisiana unearthed a 9 foot 11-inch tall skeleton. The list of these discoveries is quite extensive and many claims have been made about the origin of these giant bones, usually starting and ending with Sasquatch. Others have suggested an ancient race of giant humans.

In 1947, a strange article was posted in a Nevada state newspaper, titled ‘Atlantis in the Colorado River Desert’. The article discussed an incredible archeological discovery of 32 underground caves within a 180 square mile radius.

According to the August 5, 1947 edition of the San Diego Union clipping, explorers had unearthed, near the Arizona-Nevada-California line, the mummified remains of strangely costumed giants which the discoverers dated to around 80,000 years ago.

The Union reported that a Howard E. Hill of Los Angeles was recounting the work of Dr. F. Bruce Russell, a retired Cincinnati physician who had originally located the first of several tunnels near Death Valley in 1931, but had not been able to return to the area until 1947.

With the help of Dr. Daniel S. Bovee, who with Hill’s father had once helped open up New Mexico’s cliff dwellings, Russell had recovered the remains of several men of 8 to 9 feet in height.

“These giants,” said Hill, “are clothed in garments consisting of a medium length jacket and trouser extending slightly below the knees. The texture of the material is said to resemble gray dyed sheepskin, but obviously it was taken from an animal unknown today.” 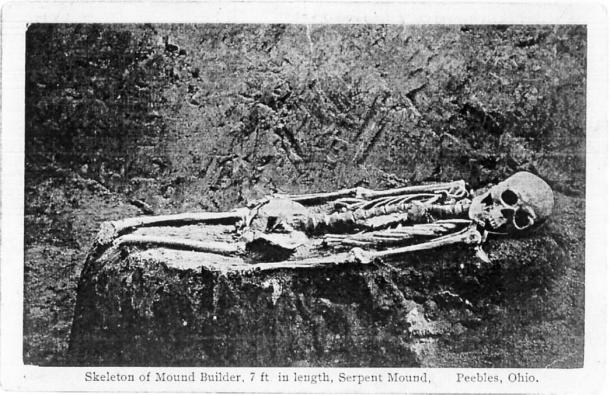 Hill also said, according to the Union, that in another cavern was found the ritual hall of the ancient people, together with devices and markings similar to those now used by the Masonic order. In a long tunnel were well-preserved remains of animals, including elephants and tigers. So far, Hill added, no women have been found.

He said the explorers believe that what they found was the burial place of the tribe’s hierarchy. Hieroglyphics, he added, bear a resemblance to what is known of those from the lost continent of Atlantis. They are chiseled, he added, on carefully polished granite.

The same burial place had been cited 10-15 years earlier by another man who supposedly made a deal with the Smithsonian. Claims have been made that the evidence of his find was stolen and covered up by Darwinian scientists to protect the theory of evolution.