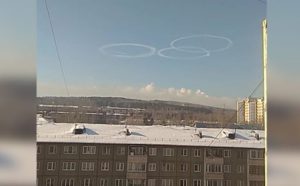 Strange video of two mysterious large ring-shaped clouds showing up in the sky above a Russian city has confused the internet.

A plane flying toward the sky rings is seen toward the end of the video and pierces the first circle.

A fourth ring emerged shortly afterwards, local media reported. The occurrence was filmed by numerous local residents in the city of Irkutsk in the Irkutsk Oblast region of southern Russia, and the photos were later widely shared on social media.

The strange incident has given rise to discussions among web users about alleged UFO sightings.

Others speculated a quadcopter or type of drone could have created the circles while others suggested that they might have been the result of secret test flights.

“Some said that the planes did it, but I did not see any planes, and the fourth circle appeared out of nowhere”, one witness wrote.