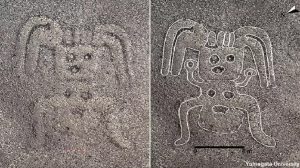 The Nazca Lines, set on a remote arid plateau in southern Peru, are a collection of stunning artistic drawings, including images of spiders monkeys, birds, fish and lizards that were carved into the ground more than 2,000 years ago.

Scientists at Yamagata University in Japan have now revealed the discovery of 143 additional geoglyphs between 100 BCE and 300 CE.

The researchers used an IBM artificial intelligence program to analyze large amounts of satellite and drone high-resolution photography and to look for the telltale signs of man-made markings.

Most of these had been worn away and otherwise would have been almost impossible to spot.

“All of these figures were created by removing the black stones that cover the land, thereby exposing the white sand beneath,” the team wrote.

While no one knows exactly why the geoglyphs were made and the fact that they were designed to only be seen from above made them a particularly fascinating phenomenon for a long time.