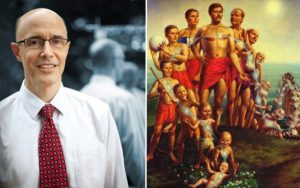 Dr. Jim B. Tucker has studied cases of past life memory in children from all over the world. His research has uncovered startling evidence for the soul and reincarnation.

During a presentation at Penn State University in 2005, Dr. Jim B. Tucker described how a mother was leaning over the changing table to change her son’s diaper. Her young toddler unexpectedly said, “When I was your age, I used to change your diapers.” Sam Taylor, of Vermont, was born 18 months following his grandfather’s death.

When he made this comment, he was only a few years old. When he was four and a half years old, however, Taylor was able to pick out his grandfather from a class picture of about 20 people and identify his grandfather’s first car from a photograph.

Tucker, a child psychiatrist, past-life researcher at the University of Virginia and author, studies cases of possible reincarnation in children. Taylor’s case is detailed in Tucker’s book Life Before Life: Investigation of Children’s Memories of Previous Lives along with studies of other children who seem to experience past life memory.

By studying children who claim to remember past lives, Tucker has accepted the possibility of the existence of reincarnation. Tucker does not approach the work as if reincarnation exists but does not deny that given the complexity of detail recalled, faking the information through coaching would be nearly impossible. Tucker also insists there’s no motivation for fraud.

Cases of Possible Reincarnation are Found All over the World

At Penn State, Tucker explained that children who claim to remember a previous life have been found in many parts of the world. These cases are more prevalent in predominantly Hindu and Buddhist countries of South Asia where reincarnation is largely accepted as a reality.

In countries such as the United States, the belief in reincarnation is nowhere near as widespread and there have been fewer cases of children’s past life memories. “We’re not sure if they’re less common or harder to find,” Tucker said. Lately, however, there are a growing number of American cases.

According to Tucker, reincarnates tend to find themselves in the same country they were living in during a previous life. Tucker suggested that an emotional connection to places could explain this trend or that perhaps the process of reincarnation involves some form of geographical constraint.

Qualities of a Reincarnate

The majority of the details subjects remember are recent, ordinary lives in which the time between the death of one person and the birth of another is less than 15 months.

The memories are mostly ordinary, except the memory of the death, which usually involves a sudden or traumatic event. In cases in which the children claim to have been murdered in a past life, they frequently express a lot of anger toward the killer.

For instance, in one of Tucker’s cases, a three-year old boy attempted to choke the man he identified as his killer.

Past Life Statements, Memories and Birthmarks

Tucker said that most children he has studied “will talk about it with great intensity one minute and go and play the next minute.” The most compelling evidence, he says, involves birthmarks and birth defects that mirror either serious wounds or the death wounds of the previous individual.

Tucker works closely with Dr. Ian Stevenson, a psychiatrist and paranormal investigator. In his book Where Reincarnation and Biology Intersect: Birthmarks and Birth Defects, Stevenson writes, “Birthmarks or other physiological manifestations have been found to relate to experiences of past lives, particularly violent death.”

Quite simply, birthmarks and deformations on the child’s body might be clues as to how he or she died in a past life. Offering a possibility, Tucker said, “It is a phenomenon of consciousness. The mental image of the wound affects the fetus to develop the same marks.”

When asked whether the consciousness enters the fetus at the time of conception, Tucker pointed out that the Earth’s carrying capacity has been predicted to max out at 10 billion people.

About 150 billion people are estimated to have walked the Earth, leaving plenty of consciousness to be recycled. If that’s true, there should be 150 billion living human beings on Earth.

Tucker suggested that a possible reason there aren’t one 150 billion people currently walking the planet might be explained by some children’s reports of spending time in heaven-like places between lives. Tucker speculated that our consciousness may act by free will and decide to return at varying times.

Evidence of past-life memories may exist in our everyday lives. Child prodigies, for example, may have acquired certain skills to such high degrees in a past life that those skills become deeply embedded in their consciousness.

Wolfgang Amadeus Mozart claimed to have been a musician in many past lives. Some hold that our attitudes, beliefs, obsessions and compulsions stem from past lives. Even love at first sight has been associated with the past life phenomenon.

Boy Who Died And Was Revived 3 Times: “Heaven is real”