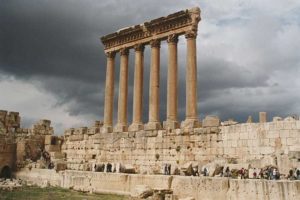 Still many other, even more wondrous things were achieved in times long past. In eastern Lebanon lies a city called Baalbek that can truly lay claim to some of the most spectacular ruins on earth: The ruins of the Temple of Jupiter.

Now in attempting to identify the true origin of the constructions at Baalbek we are told by Academics that in 27 BC, the Roman emperor Augustus supposedly came to the rather unfathomable decision to build what is absolutely and irrefutably the grandest, mightiest and most lavish temple built in of all antiquity and to do so in what is quite literally, the middle of nowhere.

The ruins at Baalbek are absolutely massive with its huge courtyard constructed on a wide platform that is still retained by three huge walls. These retaining walls contain twenty-seven limestone blocks, larger in size than those that can be found anywhere else in the world.

Each of the blocks in these walls weighs in excess of 300 metric tons, however there are three blocks in the wall that, weigh in at over 800 tons each. This trio of blocks has gained world-renowned and are collectively known as the “Trilithon”. 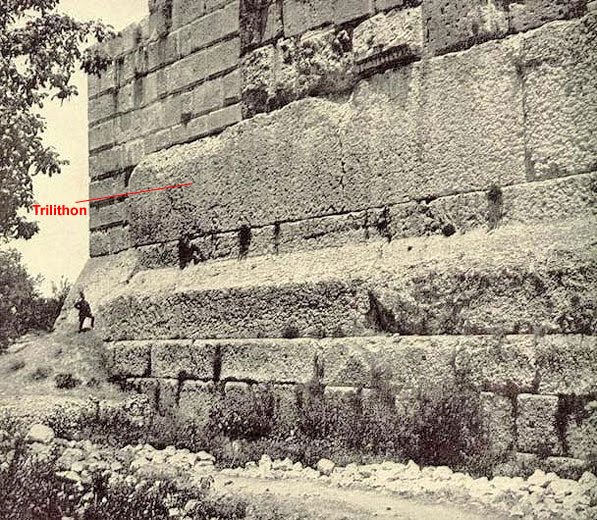 The Temple of Jupiter really is one of the most impressive ancient Temples in the world. It measures 88×48 meters and stands on a platform or podium reached via a wide stairway that can also only be described as truly monumental. The actual Podium rises a full 13 meters above the surrounding terrain.The Trillithon in the retaining walls are three of the four largest stone blocks ever hewn.

Now if we really think about all this and consider events within the officially accepted academic framework that we are given of history, the site chosen for the Temple of Jupiter makes no real sense at all and we can find no apparent or obvious rhyme or reasons Augustus may have had for selecting the site at Baalbek for such an elaborate temple.

In Roman times, Baalbek was (apparently) just a small city on a trading route to Damascus. It held no special religious or cultural significance for Rome, other than being in the centre of a coveted burial region that was favored by local tribes.

It also seems completely out of character for the undeniably selfish Rome to have gone to all the trouble of creating such lavish and extravagant architecture in Lebanon – and at a place like Baalbek that is located so far from Rome. 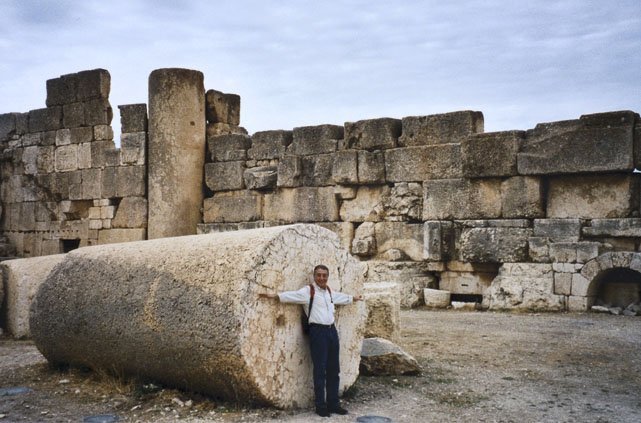 The Romans were, after all, an enormously and undeniably greedy empire and were in the very process of stealing historic treasures from other countries, such as the obelisks from Egypt, at the very same time the Temple of Jupiter was under construction.

It makes much more sense to surmise that Baalbek may have had something else the Romans wanted from the site. Possibly something no other place, not even Rome, could offer them. It could even be the reason why so many people wished to be buried there. But we are told by Academics that no, the temple is definitely and indisputably of Roman origin.

There are however, serious problems with this claim. Investigation into the blocks in the retaining wall of the Baalbek temple site very clearly shows them to be far more eroded than the bona fide Roman ruins of the Temple of Jupiter and the two other Roman temples that can also found on the site.

Now since the stone of the retaining wall is of the same type as the Temple, it is reasonable and logical to assume that the heavily eroded blocks are naturally, much older. 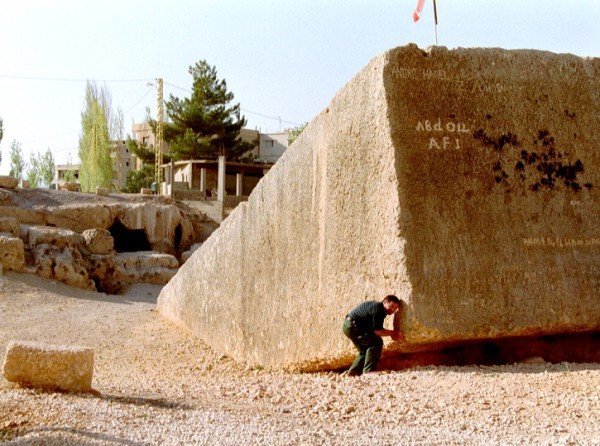 It is then also logical to surmise that the Roman temple was in fact, an augmentation to a much older pre-existing platform and this of course would also help to explain why on earth such a remote site was chosen for the temple – because it offered Augustus a ready made, pre-existing platform on which to construct it.

The issue really is quite simple and straight forward and it’s difficult to understand why the idea that construction of the platform and retaining wall could have taken place earlier than the Temple is scoffed at by the mainstream Archeological Community.

The substantial amount of erosion visible on the large blocks of the retaining wall quite adequately qualifies as material proof of their far greater age than the actual ruins of the Temple of Jupiter. It’s reasonably apparent that if quite substantial geological evidence significantly apposes the theory then the theory is obviously incorrect!

But there is a problem with this for academics, because this of course would have to mean that when the Romans had constructed the Temple of Jupiter, they had done so on a platform that had been previously constructed by a far more ancient party who at this stage remains unknown and they certainly don’t want to bring up that “Ancient Civilization” thing again.

A notable point in this issue is that the Roman Empire was well known to have been quite an egotistical regime and yet we find no claim to building the incredible retaining wall anywhere in Roman records. There still exists, actual texts that record Roman transport capabilities during the reign of many Roman Emperors, including Augustus. 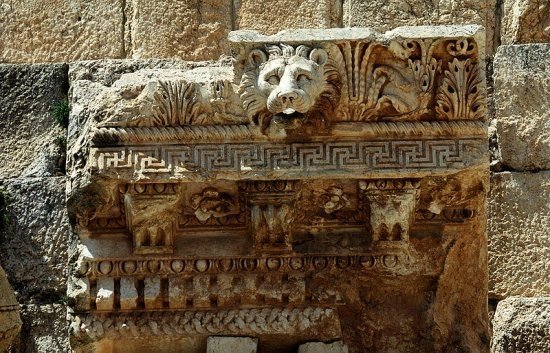 These records clearly show that the load limit for the transportation of big blocks elsewhere in the Roman empire at the time was just a little over 300 metric tons and that was achieved only with the greatest amount of difficulty.

The highly celebrated transportation of the 323 ton Laterano Obelisk to Rome, for example, was an enormously difficult and dangerous task that spanned the reign of three emperors. And yet we find that transportation of the massive 800 ton blocks at Baalbek for the Temple of Jupiter is not mentioned in Roman records anywhere at all. This fact also raises immediate questions.

It is also very worth noting that by the reign of Augustus, the Romans also knew about, and very often used, concrete. The Coliseum still standing in Rome today is a good example of a classic Roman concrete structure.

It has simply never been in Roman style to build with megalithic blocks. In fact such megalithic architecture appears no where else at all in the entire Roman Empire. It is also significant that Ptolemys conferred the title of Heliopolis upon Baalbek.

For him to have given the place that particular title, it stands to reason that Baalbek had to have been an ancient holy place and must have already had some notable architecture or some significant connection to the other Heliopolis (Sun City), also part of Ptolemys’ domain in Egypt.

And there’s still a further clue: In 636 AD the Temple of Jupiter was taken over by the Arabs who turned it into a fortress, also doing some further construction of their own. This means that the blocks used in the Arab sections of Baalbek were laid about 650 years after the blocks of the Roman Temple.

So consider this conundrum: If the large blocks of the retaining wall were Roman, then the newer Arab blocks would mark the erosion of the older Roman blocks as they were after the first six or seven-hundred years since they were laid. Right? 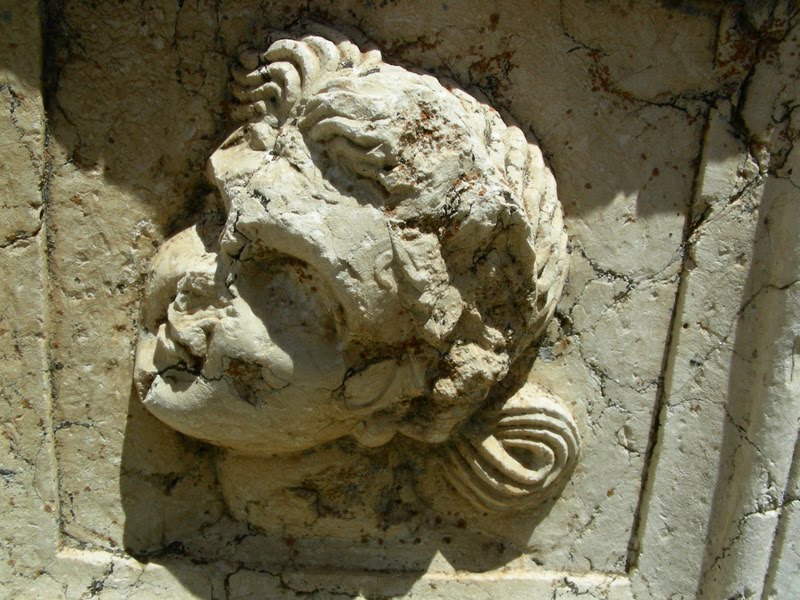 According to local legend, Baalbek had supposedly been a religious centre devoted to Baal in Phoenician times and local Arab legends actually place the cyclopean blocks of the retaining wall back to the time of Cain and Abel. Other tales tell that the platform was built by the Gods of old.

Near the southern entrance of Baalbek is a quarry where the stones used in the temples and retaining walls were cut. No traces of any ancient road can be found between the quarry and the Temple which also raises questions on how the enormous 800 ton quarried monoliths were ever even transported to the site.

This lack of any road can only mean either one of two things: Either the blocks of the retaining wall were transported so far back in antiquity that all trace of the road has long since disappeared, or: a road was never required for the task of transporting them. In fact a road would have been of little use anyway due to the sheer weight of the blocks. 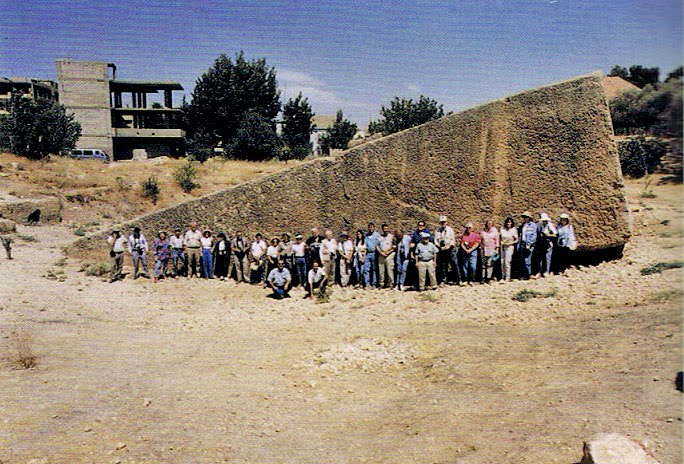 The foundations of any road strong enough to be used for such a task would have to have been truly immense and if such a road had ever existed some trace of it would undoubtedly still remain today. So how were they moved?

Another huge stone block known as the “Stone of the Pregnant Woman” still now lies in the ancient quarry where it was cut in antiquity. It measures 21.5m x 4.8m x 4.2meters in size, weighs an estimated 1,000 tons and is the largest hewn stone to be found anywhere in the world.

There is no contractor or crane in the world that is capable of moving these hewn blocks from the quarry to the temple site. Such a task is still well beyond any of our current transportation capabilities.