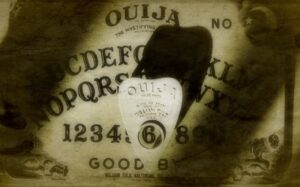 During the 1800s, brothers William and Horatio Eddy were famous mediums who, while apparently in trances, supposedly could summon spirits. They were said to be descended from a woman who, in 1692, was burned as a witch in Salem, Massachusetts.

When they displayed psychic gifts as young children, their father beat them in an attempt to get them to stop. When this failed, he sent them to work in a sideshow for a traveling circus, during which audience members would attempt to wake them from their trances.

This resulted in their being regularly beaten and abused, and combined with their earlier tortures at the hands of their father, their bodies bore numerous scars and burn marks.

The brothers were sons of Zephaniah Eddy and his wife Julia Maccombs, natives of Vermont. Growing up on a small farm near Chittenden, Vermont, both brothers are said to have exhibited strong psychic abilities from an early age.

When they dropped into trances, all manner of supernatural occurrences would happen around them. As adults the Eddy brothers, along with their sister Mary, ran an inn in Vermont, the Green Tavern, where they held regular séances for free.

In 1874 the New York Daily Graphic newspaper hired attorney Henry Steel Olcott to determine whether the Eddys were frauds. At that time, one or the other of the brothers would conduct the séance from within a box (usually William’s choice) or from behind a cloth screen (Horatio’s preference).

In either case, numerous spirits would emerge, fully materialized, after the medium had fallen into a trance.

These spirits would speak in voices and foreign languages that neither Eddy brother possessed, and they sometimes sang in accompaniment to strange music that appeared to come from either within the box or from behind the screen. In regard to the latter, however, Horatio was in plain view, and was not playing any instrument.

Olcott spent ten weeks studying the Eddys and their séances, during which he even took measurements of the spirits’ height and weight. According to his records, the most common apparitions to emerge from the box or screen were two Native Americans, a man named Santum and a woman named Honto, but other races were also represented.

In all, Olcott recorded sighting more than four hundred apparitions. Still, he remained suspicious of the Eddys’ talents, so he paid several men to inspect the box and the Green Tavern for places where human beings posing as the spirits or their voices could hide before the séance began.

When he found no evidence of trickery, he declared the Eddy brothers’ talents to be genuine. He subsequently wrote about his experiences in a series of fifteen articles, later published as People from the Other World. Skeptics, however, continued to dismiss the Eddys as frauds.

Olcott would later learn that the brothers were descended from a long line of psychics. Mary Bradbury, a distant relative, had been convicted of witchcraft at Salem in 1692. She had escaped the village with the help of friends.

Their own grandmother had been blessed with the gift of “second sight” and often went into trances, speaking to entities that no one else could see.

Their mother, Julia, had been known for frightening her neighbors with predictions and visions although her husband, Zepaniah, condemned her powers as the work of the Devil. Julia quickly learned to hide her gifts from the cruel and abusive man.