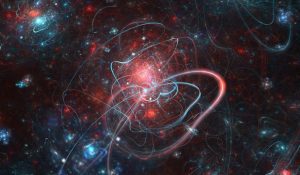 “Could two lookalike galaxies, barely a whisker apart in the night sky, herald a revolution in our understanding of fundamental physics? Some physicists believe that the 2 galaxies are the same – it’s image has been split into two they maintain, by a “cosmic string”; a San Andreas Fault in the very fabric of space and time.

If this interpretation is correct, the CSL-1 – the name of the curious double galaxy – is the 1st concrete evidence for “superstring theory”, the best candidate for a T.O.E., which attempts to encapsulate all the phenomena of nature in one set of equations.

The problem with string theory is that the string are fantastically smaller than atoms and, therefore, impossible 2 detect in any coceiveable lab experiments. But recently, physicists realised that the extreme conditions thatexisted in the early universe could have spawned enormously big strings. It is one of these ‘cosmic superstrings’ that some believe is passing between the earth and CSL-1, and, in the process, creating the curious double image of the galaxy.

The realisation tha big strings are possible has come from exploring the most esoteric implications of the field. For instance, the only way strings can vibrate in enough different ways to mimic all the known fundamental particles is if the strings vibrate in a spacetime of 10 dimensions. Since we appear 2 live in a universe with a mere 4 dimensions, string theorists have been forced to postulate the existence of 6 extra space dimensions ‘rolled up’ so small we have overlooked them.

The existence of the extra dimensions opens up the possibility of more comlex objects. In addition to strings, which extend in only one dimension, it is possible to have objects with two, three or more dimensions. These are dubbed branes, or p-branes, where the “p” denotes the number of their dimensions. This has raised the possibility that our universe is a three-brane – a 3dimensional ‘island ‘ adrift in a 10-dimensional space. And, if it is, it may not be alone. Some have suggested that the big bang was caused when another brane collided with our own 13.7 billion years ago. Crucially, collision between branes creates strings – both within each brane and as a kind of spaghetti connecting the branes. And these can be stretched 2 cosmic dimensions 2 make cosmic superstrings. “Cosmic strings turn out 2 be pretty much inevitable in the brane scenario”, says Tom Kibble of Imperial College, London.

Cosmic superstrings would be under enormous tension, like a geological fault in the earth’s crust. But, being free to move, they would attempt 2 relieve the tension by lashing about hru space at almost the speed of light. But there most interesting property is the effect they have on their surroundings. “A string distorts the space around it in a very distinctive way,” says Kibble.

One way 2 viualise this is 2 imagine a string coming up thru this page. Imagine cutting from the paper a narrow triangle whose tip si at the string, then gluing the paper back together again. the result will b a shallow cone centered on the string. Because of this distortion of space, if a string passes between us and a distant galaxy, its light can come to earth along 2 possible routes : one on either side of the string. Consequently, ther will be 2 identical images of the galaxy only a whisker apart – which is exactly what is seen in the case of CSL-1.

CSL-1 was discovered by a team lead by Mikhail Sazhin of Capodimonte Astronomical Observatory in Naples and the Sternberg Astronomical Institute in Moscow. They christened it Capodimonte – Sternberg Lens Candidate One, (CSL-1). “It looks like the signature of a string ” says Kibble. “However, it is always possible we are seeing 2 galaxies that just happen 2 look surprisingly similar”. This is the view of the sceptics. “CSL -1 is most likely to be just a pair of galaxies that happen to be close together in the sky” says Abraham Loeb of the Harvard-Smithsoniam Centre for Astrophysics. “We know of many close pairs of galaxies in the local universe, including our own Milky Way and Andromeda.” But others are keeping their fingers crossed that Loeb is wrong. “I am hoping nature won’t have played such a trick on us ” says Tanmay Vachaspati of Case Western Reserve University, Ohio.

If CSL-1 was the only piece of evidence for a cosmic superstring, it might be easy 2 brush it under the carpet. But it isn’t. There is the ‘double quasar’ Q0957+561A,B. Discovered at Jodrell Bank near Manchester in 1979, the two images of a superbright galaxy, or quasar, are formed by a galaxy lying between the quasar and the earth. The gravity of the intervening galaxy bends the light of the quasar so that it follows 2 distinct paths to earth, creating 2 images of unequal brightness. Crucially, the 2 light paths are of different lengths and so the light takes a different time 2 travel along each. In fact, astronomers find that when one image brightens, the other image brightens 417.1 days later.

But this is not what has been found by a team of astronomers from the US and Ukraine, lead by Rudolf Schild of the Harvard-Smithsonian Centre for Astrophysics. When they studied the 2 images they noticed that, between Sept 1994 and July 1995, the 2 images brightened and faded at the same time – with no time delay. The 2 images did this 4 times on each occasion for a period of about 100 days.

The only was Schild and his colleagues can make sense of this behaviour is if, between Sept 1994 and July 1995, something moved across our line of sight to the quasar, simultaneously affecting the light coming down two paths to the earth. The only thing that fits the bill, they claim, is a vibrating loop of cosmic string moving across the line of sight at about 70% of the speed of light. To oscillate once every hundred days or so, the loop has 2 be very small – no bigger than 1% of the distance between the sun and the nearest star. And Schild and his colleagues calculate that the string must be remarkably close to us – well within our Milky Way galaxy.

Most physicists remain sceptical about the evidence for cosmic superstrings. If the case is to be strengthened, it will be necessary to find more candidates like CSL-1 and Q0957+561A,B. Alterntively, it will be necessary to detect the “gravitational waves ” coming from a string. These are ripples in the fabric of space, much like the ripples which srpead out on a pond from an impacting raindrop.

Strings are traveling very fast. If they get a kink in them, it is possible for this part of the string to crack like a whip. The part producing the crack travells at almost the speed of light and should produce an intense burst of gravitational waves. As first pointed out by Thibault Damour of the Institut De Hautes Etudes Scientifiques in Paris and Alex Vilenkin of Tufts Institute of Cosmology in the US, such signals could be detected in the next few years by Europe’s Virgo detector or America’s Laser Interferometric Gravitational-Wave Obsrevatory.

String Theory has long been criticised as that which makes no observable predictions about the universe we live in. If the discovery of cosmic superstrings holds up, the theory may finally have connected with reality and the critics may at last be silenced.

Time Travel – It Is Possible?