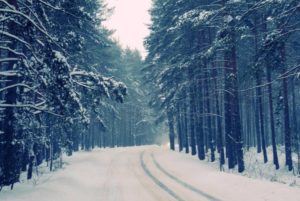 It was about 7:00 pm on December 22nd in 2004, when a young couple, Julia and Mark decided to take a drive in New York’s Catskill Mountains. Mark was from Pennsylvania and not very familiar with the Catskills but he thought everything would be fine if he just stayed on the main roads. 30 minutes after they began their drive they were lost, and it was beginning to snow.

The couple drove around for about an hour when Julia noticed that the gas gauge was almost on empty. The snow was coming down harder and panic was beginning to set in. Then they saw lights down the road, they were some distance down the road but straight ahead. As they got closer the couples prayers were answered, gas pumps.

Mark pulled the truck up to the pumps and got out. Before he could get the gas cap off a man came out and said “Fancy truck young man, Filler up?” Mark hadn’t had anyone pump his gas for years but he said “Sure, filler up.” Mark then ask the man for directions to the closest major road which wasn’t to far from the gas station. Things were looking up.

Julia had gotten out of the car and was walking towards a small “General Store” which was right beside the gas station. Mark followed her, looking around as he went. When he looked back at the gas pumps, they looked old like pumps he had seen in old Black and white movies, he thought it was kind of odd but continued to walk towards the store.

As he got closer he noticed three cars parked on the side of the building. They appeared to be almost new but they looked like cars from the 1940’s. When Mark entered the store Julia was talking to the lady at the cash register. The couple walked around the store giving each other puzzled glances. There were none of the things they were used to seeing, no bags of potato chips or other common food items. The only thing they recognized was Coke, which was in bottles they had never seen before, and Hershey bars in a strange-looking wrapper.

The couple went back to the truck and payed the man for the gas, $2.85 for 19 gallons of gas. The man even commented that the gas price was a little high because of the War. Mark thanked the man for the directions and drove away. Once on the main road the couple began to talk about the strange stop and wondered if it was even real.

Mark then recalled that he had gotten gas the day before, there was no way they should have almost run out. When the couple arrive home Mark checked the gas gauge, thinking maybe there was a leak. The tank was near full, then he noticed the clock, 11:00 pm, that meant they had been gone for 4 hours. Mark couldn’t believe they had been gone that long and when he checked a clock in the house it was only 9:00 pm.

A few days later Mark and Julia drove back to where they believed the out of time gas station and general store was located but could not find any trace of them. What they experienced is of course highly unusual, but what makes this story of possible time travel different from many is that it happened to 2 people, who both interacted with the residents of another time.

Where did ships from the Middle Ages come from in the US deserts?