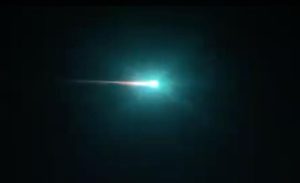 Scientists say the “jury is still out” about a mysterious green glow that traveled across the sky in the remote West Australian outback on June 14, 2020, reports ufosightingshotspot.blogspot.com.

Night workers on remote sites from Cape Lambert to Hope Downs in the Pilbara saw the bright light just before 1:00 am, and many captured it on video.

There were reports of sightings as far away as the Northern Territory and South Australia, according to Glen Nagle from the CSIRO-NASA tracking station in Canberra.

“It was really a spectacular observation, people have captured something very special here.” Glen Nagle said.

It looks like the object has a rectangular shape, suggesting that instead of a meteorite or space debris, it could have been an alien spacecraft.

“Martians have hit the Pilbara,” wrote one sky gazer in a remote region of Western Australia. “Next phase of 2020 incoming!”