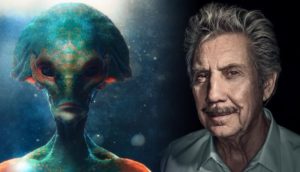 Robert Bigelow — the real estate billionaire and founder of Bigelow Aerospace Space Habitat Company — held an interview with “60 Minutes” in which he outlined the advantages of the commercial space industry and how private companies can pave the way for people to live in orbit.

While the founder of Bigelow Aerospace is betting that humans will take leave of Earth, he also seems convinced that aliens are coming this way. He said that “there has been and is an existing presence, an ET presence.”

That is, extraterrestrials are afoot in the land. Or at least asaucer in the sky.

Lara Logan: Do you believe in aliens?

Robert Bigelow: I’m absolutely convinced. That’s all there is to it.

Lara Logan: Do you also believe that UFOs have come to Earth?

Bigelow told 60 Minutes that after his grandparents once had a near brush with a UFO outside Las Vegas he first became interested in aliens.

“It really sped up and came right into their face and filled up the entire windshield of the car,” he said during the interview. “And it took off at a right angle and shot off into the distance.”

So Bigelow apparently owns a corporation that has been receiving FAA inquiries about sightings of UFOs and other strange activities, 60 Minutes have confirmed. Indeed, his connection with UFOs is the reason there’s an alien symbol on the exterior of the Las Vegas headquarters of Bigelow Aerospace.

Lara Logan: Is it risky for you to say in public that you believe in UFOs and aliens?

Robert Bigelow: I don’t give a damn. I don’t care.

Lara Logan: You don’t worry that some people will say, “Did you hear that guy, he sounds like he’s crazy”?

Lara Logan: Why not?

Lara Logan: Do you imagine that in our space travels we will encounter other forms of intelligent life?

Robert Bigelow: You don’t have to go anywhere.

Lara Logan: You can find it here? Where exactly?

Bigelow is doing good things for space exploration. And if he wants to spend millions of his own dollars investigating the possibility that other intelligent creatures are prowling our planet, that’s his prerogative. But we hope he’ll let us know if he’s found something convincing.

Pastor considers angels to be representatives of a highly developed civilization