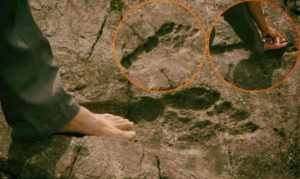 Some old historians dissed reports of bizarre finds from Western New York, but most acknowledged mystery. We should be suspicious of stories from frontier papers that stood to gain plenty from tall tales. These are from historical texts.

When the Whites arrived, Western New York was littered with the works of earlier people. Stone walls, graded roads, and fortifications were reported, though most commonly these markers were earthen mounds or enclosures.

The Native Americans seldom had any tradition about the people who had put them in place. Most of us now believe that the influence of the Mississippian (Mound-Builder) culture was behind them.

The settlement and the plow have been lethal to most of these fragile works, and even the old mound-fanatic E. G. Squier confessed ruefully in 1849 that the Western Door held little any more worth looking at. As these works were destroyed in the last century a stablefull of curiosities seems to have come out.

Most crumbled, but a thigh bone was found to be 28” long. Exquisite stone points, enamelwork, and jewelry (like that of Mexico or Peru) were also unearthed in the area. The mound looked like those of the Old World.

Cheney also mentions a skeleton seven-foot-five (with an unusually thick skull) from a Chautauqua County site near Cassadaga Creek. Inside a very old mound near Cassadaga Lake were some large skeletons that were examined by medical gentlemen.”

One measured nearly nine feet. (In 1938 Charles Hunnington of Randolph was so inspired by Doc Cheney’s finds that he made two giant “wooden Indian” statues, probably still at the museum in Little Valley.)

The History of Cattaraugus County notes the town of Carrollton’s “Fort Limestone,” whose rough figure-eight enclosed five acres. In 1851 the removal of a stump turned up a mass of human bones. Some were enormous.

Franklinville’s Marvin Older virtually gamboled about the site with them: a skull fit over his size seven-and-a-half head; a rib curved all the way around him, a shinbone went from his ankle to above his knee, and a jaw – with bodacious molars – went over his own. Its first owner had probably stood eight feet tall.

Stafford Cleveland’s History and Directory of Yates County refers to skeletons from a conical burial mound by Keuka Lake in the early 1800’s. A Penn Yan doctor found that many were seven footers. (Tales of ghosts and buried treasure cling to this vicinity as well.)

Turner’s History of the Holland Purchase reports an ancient three-acre earth fort in Orleans county (about one and a half miles west of Shelby Center) that covered seven- and eight-foot skeletons. Their skulls were well developed in front, broad between the ears, and flattened on top. Also, Turner notes that, upon digging a cellar on his town of Aurora farm, Charles P. Pierson found a giant of his own.

The 1879 History of Allegany County noted a circular mound between Philip’s Creek and the Genesee in the village of Belmont. Several feet high and fifteen or so in diameter, it disgorged human bones, some very large, when the railroad was made in 1849 and 1850.

Giant human skeletons don’t ring any bells with us. Some think the Scandinavians were in Western New York, and they were considered virtual giants in the ancient world (whose people were traditionally much shorter than those now). Many Vikings would seem tall even today, but they were not routinely seven-footers.

Not all the humanlike skeletons found about the Western Door were so surely human. Several old histories discuss the two very bizarre skulls taken in the early 1820’s from a mound on Tonawanda Island near Buffalo.

One early writer notes each “portentous, protruding lower jaw and canine forehead.” Another adds that the burial customs were entirely unlike those of the region’s natives.

Our County and Its People (Truman C. White, 1898) mentions skeletons that seem to have been “platycnemic” – flat-shinned. In the bluff at Fort Porter (Buffalo) one such skeleton was found near ancient implements.

Burials of up to three such skeletons have been found high up on river or lake banks about the region. Their flat shins and “other skeletal peculiarities” were thought due to climbing and living in trees. These are odd stories to make up.

In nature’s evident experiments toward Homo sapiens, some of the discontinued models were very large (Gigantopithecus comes to mind); none are thought to have set foot or dragged knuckle on any American soil.

An eight-footer turned up in an Ellisburg, PA mound (near Wellsville, NY) in 1886. The same year a team of professors and professionals found dozens of huge, oddly-skulled humans in a mound in Sayre, PA (near Elmira, NY).