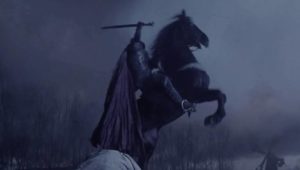 As darkness approached a man excavating a site at Bottlebrush Down decided to call it a day and head for home. His journey would turn out to be one of the most memorable events of his life. The incident occurred in 1924 but would not become known publicly until 1956, when the man shared his story with James Wentworth Day who published the story.

As the man drove between the Dorset, England villages of Cranborne and Sixpenny Handley he had an incredible vision of something that he would recognize immediately. What he saw was a horseman, a warrior figure mounted on horseback and moving at a high rate of speed.

As the man would say, “I could see that he was no ordinary horseman, for he had bare legs, and wore a long loose cloak. His horse had a long mane and tail, but I could see neither bridle nor stirrup. His face was turned towards me, but I could not see his features. He seemed to be threatening me with some implement, which he waved in his right hand above his head.”

The man who reported the strange encounter with the Horseman was none other than R.C.C. Clay. Clay was a highly respected expert on ancient history and was able to recognize that what he had seen was the phantom figure of an Iron Age Horseman in full battle gear.

Clay’s report could be dismissed as an obsession with history, however, as Clay searched to find out if anyone else had seen the Horseman he found that there were in fact several other reports of the Iron Age Horseman seen at Bottlebrush Down.

The Victim’s Ghost: Did Teresita Basa Solve her own Murder?

What It An Near-Death Experience?