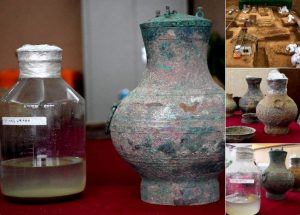 An ancient bronze vessel containing a rather curious concoction was uncovered by archeologists in China. The elixir was found along with painted clay pots, a goose-shaped lamp and the well-preserved remains of a nobleman buried in the tomb of his family in the Henan Province of Central China.

The archeologists who dug up the site at the time believed that the vessel, which contained about 3.5 liters of a yellow fluid strongly smelling of alcohol, had been used to store wine.

However, since then, laboratory testing has revealed that the substance is much more unusual-an’ elixir of immortality’ consisting mainly of potassium nitrate and alunite.

“It is the first time that mythical ‘immortality medicines’ have been found in China,” said Shi Jiazhen of the Cultural Relics and Archeology Institute of China.

“The liquid is of significant value for the study of ancient Chinese thoughts on achieving immortality and the evolution of Chinese civilization.”

Whether the liquid was actually intended for drinking or whether it was simply used as a ceremonial object remains unclear, however its contents certainly wouldn’t have done anyone any favors.

Since the elixir is now more than 2,000 years old, it is definitely not recommended to drink it today.