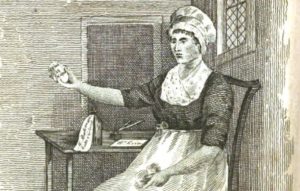 Mary Bateman was born in Aisenby, North Yorkshire in 1768 and became known as the ‘Yorkshire Witch’.

Born as Mary Harker, her father was a farmer and both her parents were well respected in the local community.

Mary, however, showed an inclination towards theft from an early age and, when her stealing did not stop, at the age of 13, she was sent to work as a domestic. By 1788 she had been dismissed from so many posts that no one would employ her and she moved to Leeds and took up dressmaking. Mary was quite successful and supplemented her income by becoming a soothsayer.

When Mary was twenty-four she married a wheelwright named John Bateman but marriage did nothing to quieten her and they were soon forced to move to escape accusations of theft.

In 1806 she created the hoax known as The Prophet Hen of Leeds, in which eggs laid by a hen were purported to predict the end times. Villagers believed doomsday had come when a hen began laying eggs with the phrase “Christ is coming” on each one, but it was later found to be a hoax perpetrated by Bateman, who had written on the eggs using acid and reinserted them back into hen’s. 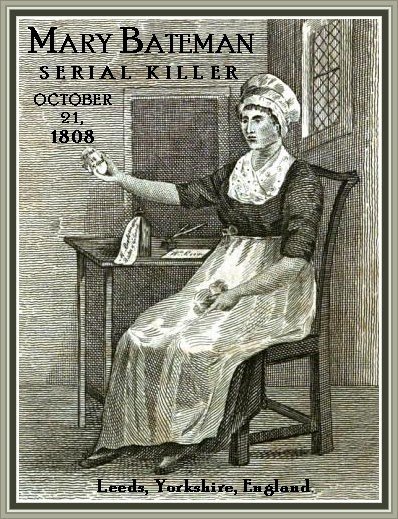 Mary soon became a prominent fortuneteller in Leeds who prescribed potions which she claimed would ward off evil spirits as well as acting as medicine but was feared by some of the superstitious locals as a being a witch.

Also in 1806, William and Rebecca Perigo approached Mary convinced that a neighbour had cast a spell on Mrs Perigo. By this time Mary had an imaginary oracle, Mrs Blythe. Mrs Blythe obligingly advised the Perigos to follow various courses of action, all of which enriched Mary to the extent of impoverishing the couple… and this lasted a period of almost 2 years.

One of the instructions from the ‘oracle’ was for Mary to sew four monetary notes into the Perigos’ bed and for them to give Mary four golden guineas in exchange. Other instructions followed, all of which the Perigos carried out.

Mary went to the Perigos in April of 1807, and showed them a letter she said had come from Mrs Blythe. In it, the oracle told the dupes to take half a pound of honey to Mrs Bateman. She would put ‘such stuff’ into the honey as the helpful spirit advised. The couple must then eat this mixture.

The ‘stuff’ she was to put in was mercuric chloride. On 11th May the Perigos started eating the ‘pudding’ and they both became sick. Mary gave them an antidote. Unfortunately for the couple, this turned out to be arsenic.

William Perigos ate very little of the mixture or antidote. Even so, he was ill for days, but his wife Rebecca, who was more scared of the spell than the antidote ate it all. She died in agony on May 19th 1808.

William duly informed the authorities and Mary was arrested and charged with murder. A search of her house turned up a cache of the Perigo’s property and a collection of poisons. At her trial she tried to blame Mrs Blythe but this was easily refuted.

Dozens of witnesses testified to Mary’s criminal activities including fraud, extortion and abortion. The jury quickly returned a guilty verdict. Sentenced to death, Bateman attempted to avoid her execution by claiming she was pregnant.

The judge subsequently requested that the Sheriff gather a panel of ‘matrons’ to assess Bateman’s claim but a physical examination disproved her pregnancy claims. Even while she waited for her appointment with the gallows she could not resist temptation and swindled fellow prisoners with promises of reprieves.

Mary Bateman was hanged at 5 am on 20th March 1809. Her body was displayed in public and thousands paid to view it, with the proceeds going to charity. Strips of her skin were tanned into leather, and sold as charms to ward off evil and her skeleton is currently kept in the Thackery Medical Museum in Leeds.

The Strange Disappearance Of Brian Schaffer