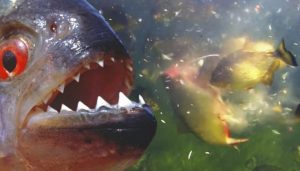 Piranhas have a long-standing “fame” as killer fish, although it is believed that the danger from them is greatly exaggerated due to horror films.

However, in Paraguay (South America) in the first days of 2022, piranha attacks have already killed 4 people and about 20 were injured. Dozens of people were also bitten by piranhas at the end of December 2021.

This increased piranha activity scares many locals, and although it coincides with the peak of piranha aggression occurring during these months, it still does not explain such a large number of victims in such a short time.

On the first weekend of 2022, two victims of piranha attacks were found in the Tebikuari arm of the river, in a place known as Ivera Boca, in Villa Florida, Misiones department.

The bodies of the two guys were covered in piranha bites when found.

On January 2, a 22-year-old boy went missing while walking with his family along the Paraguay River, south of the capital, Asuncion, in the Ita Enramada region.

His family contacted the police, claiming that while swimming, piranhas attacked him and dragged him under the water.

The police arrived at the scene and soon found the body of the missing person in the water with traces of strong bites from the piranha’s razor-sharp teeth.

On January 3, a 49-year-old man named Pedro Torres Anyasco was killed by piranhas in the same Paraguay River in Puerto Rosario after he went swimming. When his corpse was found, he was covered in bites from piranhas.

As for the cases of piranha attacks without fatal outcomes, they were recorded in the Itapua department, on the beach of the Bella Vista hunting and fishing club, where piranhas bit at least a dozen bathers by the arms and legs.

Similarly, it was noted in the Aguaraimi River, in the department of San Pedro, and in the Jejuimi River, at the resort in Villa Igatimi, in Canindeiu, where dozens of bathers were injured by piranhas in December and early January.

Local biologist Hector Vera explains that piranhas, like other fish species, move in schools as a survival strategy and that they tend to be aggressive during the breeding season, which runs from October to March, coinciding with the start of the breeding season.

Vera says that during the breeding and spawning season, male piranhas take care of their nests, so they tend to behave aggressively when trying to protect their young.

However, he clarified that deadly piranha attacks on humans are rare, so they can be considered isolated cases. Vera also clarified that piranhas more often bite people on their toes, but rarely attack their hands and, moreover, their faces, as it happened in registered cases.

Based on materials from lanacion.com.py