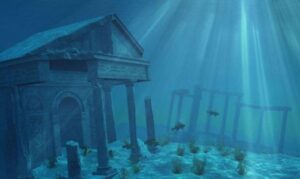 The ancient city of Helike (Eliki), situated on the southern shore of the Gulf of Corinth, roughly 93 miles west of Athens, was originally founded in the Early Bronze Age (2600-2300 B.c.). The first prehistoric settlement was submerged beneath the waves about 2,000 years before the city was destroyed.

In the eighth century B.C. The poet Homer states that the city of Helike participated in the Trojan War with one ship under the command of Agamemnon.

Helike had become a wealthy and successful metropolis, the leader of the 12 cities of the first Achaean league (a union of local city states), and founder of colonies abroad such as Priene, on the coast of Asia Minor, and Sybaris in Southern Italy.

Eliki, also known as Dodekapolis (from the Greek words dodeka meaning twelve and polis meaning city), became a cultural and religious center with its own coinage. Finds from ancient Eliki are limited to two 5th century copper coins, now housed in the Staatliches Museum, Berlin.

The obverse shows the head of Poseidon, the city’s patron, and the reverse his trident. There was a temple dedicated to the Helikonian Poseidon. Helike’s temple and sanctuary of Helikonian Poseidon were famous throughout Classical Greece, and was rivaled only by the Oracle at Delphi, across the Gulf of Corinth.

But all this was to change one terrible night in the winter of 373 B.C. For a period of five days, citizens of the city gazed in bewilderment as snakes, mice, martens, and other creatures fled from the coast and made for higher ground.

Then, on the fifth night, “immense columns of flame” (now known as earthquake lights) were witnessed in the sky, followed by a massive earthquake, and a towering 32 foot high tsunami wave. The coastal plain was submerged, and as Helike collapsed, the tsunami rushed in and dragged its buildings and its inhabitants out with the retreating waters. 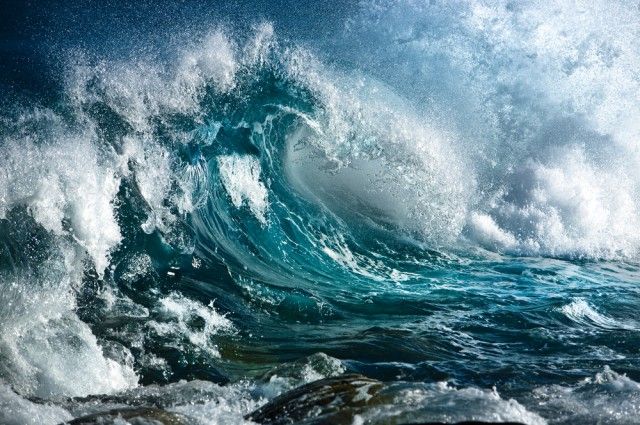 The city and its surroundings disappeared beneath the sea, along with 10 Spartan ships that had been ancored in the harbor. The neighboring city of Boura, and the Temple of Apollo at Delphi, were also destroyed.

When a rescue party arrived the next morning, nothing remained of the once great city but the tops of the trees in Poseidon’s sacred grove, peeping above the waves.

Perhaps because Helike had been a revered center for worship of Poseidon (the god of earthquakes and the sea), a tradition originated among its jealous neighbors that the city’s destruction was punishment sent by the angry god for desecrating his sanctuary. Following the disaster, the former territory of Helike was doled out between its neighbors, with the city of Aegio taking over leadership of the Achaean League.

Hundreds of years later a Roman city was built on the site, which also appears to have been partly destroyed by an earthquake in the fifth century A.D. For centuries after the disaster ancient writers such as Pliny, Ovid, and Pausanias reported that the submerged ruins of Helike could be glimpsed on the sea floor.

The Greek scientific writer, astronomer, and poet, Eratosthenes (276-194 B.C.) visited the site and recorded reports by local ferrymen of an upright bronze statue of Poseidon submerged in an inland lagoon, where it often trapped the nets of fishermen. But soon afterwards the area silted over and the location became lost.

In 1861, German archaeologists visiting the region obtained a bronze coin of Helike featuring a splendid head of Poseidon, but nothing else surfaced from the ancient site. Ancient writers had all stated that the remains of the city lay submerged beneath the Corinthian Gulf, but for decades numerous expeditions searched for it without success.

In 1988 the Helike Project was formed to locate the lost city, but a 1988 sonar survey under their auspices revealed no trace beneath the sea. Consequently, director of the Helike Project, archaeologist Dora Katsonopoulou, and Dr. Steven Soter, of the American Museum of Natural History, decided to investigate the coastal plain.

Systematic excavations of the Helike Project started in 2000. The first trial trenches opened on the basis of evidence from topographical studies, bore holes and geophysical surveys, revealed buried remains in various locations along the plain dated on the basis of the excavation finds to the Early Bronze Age, Late Bronze Age, Geometric, Classical, Hellenistic, Roman and Byzantine periods. 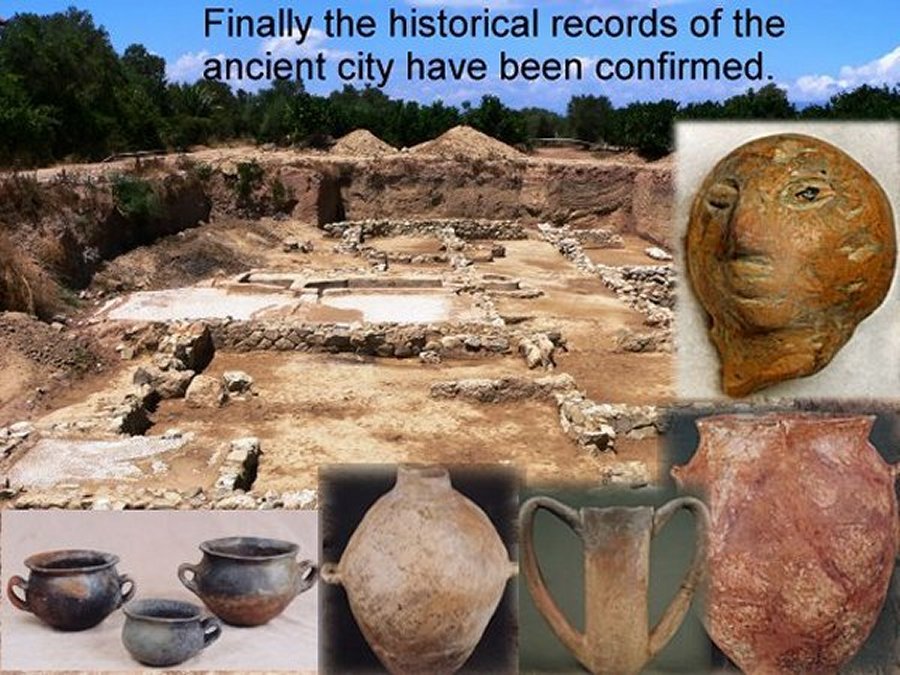 In 2001, a few feet beneath the mud and gravel, the team discovered ruins of Classical buildings, which turned out to be the remains of the city of Helike destroyed by the earthquake of 373 B.C. The location of the ruins lay almost half a mile inland, which explains why no one had found them beneath the sea.

Analyses of the microscopic organisms preserved in the layer of fine dark clay covering the buildings revealed that the site had been drowned by a shallow inland lagoon, which had subsequently silted up. The discovery of sea shells and the possible remains of seaweed on the site are evidence that Helike’s ruins were probably at one time beneath the sea.

The remains of one Classical building graphically illustrated the fate of the city. One of its walls had collapsed in a seaward direction, clear evidence to support destruction by the backwash of a giant wave. Amongst finds of demolished walls, pottery fragments, and terracotta idols, the excavators found a mint silver coin with a representation of Apollo wearing a laurel wreath, cast in the neighboring town of Sikyon a few decades before the earthquake struck.

The sad fate of this once great Classical city is thought by many to have been the inspiration for the legend of Atlantis, first recorded by Athenian philosopher Plato a few years after the Helike earthquake, in 360 B.C. A BBC Horizon documentary Helike- The Real Atlantis, made in 2002, makes this claim for the site.

The area around ancient Helike is one of the most seismically active in Europe, and at least 4,000 years of ancient settlements on the site have flourished and been destroyed by earthquakes. So it is hardly surprising that the ancient city was the center of a cult dedicated to Poseidon, the god of earthquakes.

In August 1817, an earthquake preceded by a sudden explosion destroyed five villages in the place where Helike once stood. In 1861, 8 miles of coastline sunk about 6 feet, and a 597 foot wide coastal belt of coast was submerged beneath the waves.

In June 1995, while the Helike Project team were working in the area, an earthquake of 6.2 on the Richter scale struck, killing 10 people in the adjacent town of Aigion, and demolishing a hotel in modern Eliki, killing 16.

Dr. Steven Soter collected many descriptions of odd events preceding this quake, which have overtones of the ancient accounts of the earthquake that destroyed Helike.

People heard fierce winds when the air was still outside, dogs howled unaccountably, there were subterranean explosions, strange lights in the sky, and fireballs. Huge numbers of octopuses were seen by local fishermen and, the night before the earthquake, numerous dead mice were found on the road, all of which had been run over by cars while trying to make their escape into the mountains.

These incidents are reminiscent of the behavior of animals in the 2004 tsunami that struck Sri Lanka, southern India, western coast of Sumatra (Indonesia), and Thailand, caused by a huge 9.15 Richter earthquake in the Indian Ocean. In Sri Lanka, where tens of thousands of people lost their lives, animals appear to have fled inland before the tsunami struck.

Even though the tsunami caused a heavy loss of human life in the area of Yala National Park, Sri Lanka’s biggest wildlife reserve, no dead animals were found. Experts believe that animals possess a sixth sense with which they sense a natural disaster. This is certainly suggested by their behavior before the Helike earthquakes.