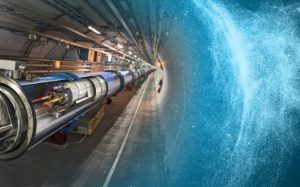 A new announcement from the European Organization for Nuclear Research “CERN” revealed that analyzing the results of 10 years of data from a collider indicates the presence of a new unknown cosmic force, which may change the physics we know, if confirmed within the next few years, reports guardianmag.us.

Particle colliders – such as the Large Hadron Collider inside CERN – aim to explore the composition of subatomic particles through a simple-to-understand mechanism, but very complex in terms of implementation, as they make particles collide, at tremendous speeds close to the speed of light, and then observe the result and compare it with theoretical assumptions.

However, according to the research results referred to by the statement, this type of fragmentation appears to have tilted towards electrons more, which means that there is an error in the model that explains this phenomenon.

The Standard Model of Particle Physics is one of the most important theoretical models that explain the composition of all matter, where you can find particles of matter such as quarks and electrons, as well as the forces with which those particles interact together.

According to this model, there are 4 cosmic forces: the weak nuclear force is responsible for the decomposition of atoms, the strong nuclear force is responsible for the fusion of the components of the atomic nucleus, the electromagnetic force which plays roles in chemical and biological reactions, and finally gravity, which is the force that we all know and studied in Science books from a young age.

Now these new results suggest the existence of a fifth force that causes the process of fragmentation of type “B” mesons to be directed towards the electrons, but these results still need further confirmation, as what happened may be just a coincidence, which is not new to CERN’s results.

In physics parlance, the result has a significance of 3.1 sigma, meaning the chance of it being a fluke is about one in 1,000.

While that may sound convincing evidence, particle physicists tend not to claim a new discovery until a result reaches a significance of five sigma, where the chance of it being a statistical quirk are reduced to one in a few million.

For this reason, the new results need a lot of analytical work in the coming years, noting that an anomaly from the theoretical model must appear at some point, because it does not fully explain many phenomena, such as gravity.

On the other hand, this model explains only 5% of the structure of the universe, while the remaining 95% of dark matter and energy do not yet have any solid theories that can explain them, and perhaps when “physics beyond the standard model” appears, we will find an explanation for these phenomena.