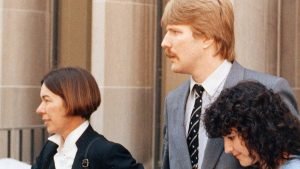 In May 1987, sometime after two o’clock on a Sunday night, 23-year-old Kenneth James Parks left his home in the suburbs of Toronto, started the car and covered 14 miles to the house of his wife’s parents.

He got out of the car, took a tire iron out of the trunk and opened the door with the key given to him. Once inside, he strangled his father-in-law, Dennis Woods, and beat his mother-in-law, Barbara Ann Woods, before stabbing the woman to death with her own kitchen knife.

Parks got back in the car, drove to the nearest police station, and stated, “I think I killed someone.”

All this time the young man was sleeping, and therefore could not be held responsible for his actions. During the trial, held in 1988, the jury reached just such a decision after nine hours of deliberation.

The prosecution considered this ridiculous and appealed the outcome of the case, but in 1992 the Supreme Court of Canada upheld the original decision.

Even the sleep specialist who was brought in as a consultant was initially skeptical about such a case of sleepwalking, because the person performed a whole series of rather complex actions. Imagine passing three traffic lights without incident, passing a stretch of freeway, etc.

Most somnambulists end up hurting themselves or those sleeping next to them, not people tens of miles away. However, upon closer inspection, it turned out that the man was really asleep …

According to the readings of the laboratory instruments, Parks was characterized by an unusually deep sleep.

Even as a child, he often talked in his sleep, sometimes walked, and until the age of 11–12 he constantly woke up in a wet bed. (A 1974 study of 50 adults who indulged in violent behavior while sleeping found that many of them also peed the bed and walked without waking as children.)

One night, one of Parkes’ brothers grabbed him by the leg at the last moment as he was about to exit through the window. Similar symptoms occurred in his relatives in three generations.

Sleepwalking is fairly common in children – about 15% experience somnambulism in one way or another, but this usually does not lead to attacks on others. Typically, children go back to bed without incident and simply outgrow their problem afterwards.

Adults sleepwalk much less often. However, unlike children, they are more prone to hostile and aggressive behavior when others try to wake them up, which has been documented in a number of studies.

True, some details from the life of Parks do not put him in the best light. Almost a year before the attack, he became addicted to gambling, which did not reflect well on his marriage. He ended up stealing $30,000 from his job to cover his debts. Two months before the attack, the wrongdoing came to light and Parks was fired.

He refrained from playing for several weeks, after which he started again and forged his wife’s signature twice to get money.

But three days before the attack, he attended a Gamblers Anonymous meeting for the first time and decided to make amends with his wife’s parents, with whom he was apparently quite close. Parks even lost sleep because he was preparing for the upcoming conversation.

Psychiatrists and other specialists found no evidence of brain disease or psychosis in Parks. He himself was shocked by what he had done.

A brain wave survey showed that he naturally cycles through sleep phases more frequently than most people. He also experienced no physical pain during the attack, despite tearing several tendons that required surgery. Parks came to his senses only at the police station.

The doctors had no choice but to admit that sleepwalking was to blame. Indeed, since then there have been studies that support the hypothesis that the brain does not fall asleep all at once.

In a small number of people, the synchronization of the process of falling asleep between different parts of the brain is so disrupted that there is complete disorganization: people can talk, walk, drive a car, and even cook food, without understanding what is happening.

Apparently, Parks went to his wife’s parents, because the part of the brain that planned this trip was not sleeping. But why did he attack? Even the prosecutor’s office could not answer this question – there was no benefit to Parks from this.

According to experts, at that moment it did not seem to the poor fellow that he was killing someone in his sleep. The kind of sleepwalking that Parks suffered happens during a certain stage of sleep, when dreams are rare and mostly consist of fragmentary images.

Also, the part of the brain that tells us what to do in a given situation (the prefrontal cortex) is inactive during this phase of sleep.

Most likely, Dennis Woods found his son-in-law wandering around the house sleeping and tried to wake Parks. He took it as if his life was in danger. Unfortunately, the part of his brain that could tell him what was really going on had been too exhausted by last night’s insomnia and debt worries.

I realized that there is a Devil: Conjuring the Satan