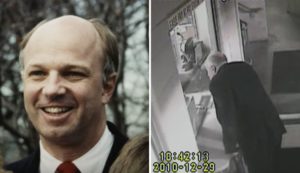 John P. Wheeler III, 66, an expert on chemical-biological weapons, the driving force behind the Vietnam Veterans Memorial and also former White House and Pentagon aide, was found dead on Dec 31, 2010.

Police in Delaware are trying to piece together the mystery of how a decorated soldier and former adviser to three US presidents was murdered, stuffed in to a dustbin lorry and dumped in a landfill.

But there’s much they don’t know about a crime that seems to get more baffling with every new clue. His mysterious death has generated furious speculation that he was the victim of an urban assault, a professional hit or even a government plot.

John “Jack” Parsons Wheeler III (December 14, 1944 – c. December 31, 2010) descended from a family of military professionals which included Joseph Wheeler, who had served as a general both in the Confederate Army, and later with the United States Army.

Wheeler III was born in Laredo, Texas, where his mother was staying with her mother while his father was in Europe. Five days after the delivery, the family received a telegram that his father was missing in action in the Battle of the Bulge. His father was later found to be alive.

From 1979 to 1989 he was chairman of Vietnam Veterans Memorial Fund that built the Vietnam Veterans Memorial which opened in 1982. He had supported the controversial Maya Lin design and ran afoul of Ross Perot and Jim Webb who tried to oust him after they disagreed with the stark design. Wheeler worked to address their issues by adding The Three Soldiers sculpture by Frederick Hart to the memorial.

While friends say Wheeler considered his work on the Vietnam memorial to be his greatest contribution, they also say his decision to re-immerse himself in the war’s legacy resurrected many of his personal demons.

What many don’t know about Wheeler’s career is that many of these years were marred by periods of erratic, obsessive and manic behavior, as well as periods of depression and unpredictable mood swings. For a year after the war, the troubled Wheeler sought solitude at a Tennessee monastery, and later enrolled in an Episcopalian seminary based in Virginia.

Once he rejoined the secular world, he tended to throw himself into causes or become transfixed by certain issues and pursue them relentlessly and aggressively. “He could be tremendously mercurial,” one former co-worker said.

“He could be the most caring, compassionate, sensitive individual, and other times, he would be completely erratic, fly into fits of rage, and be completely unreasonable. You never knew from day to day which one he would be.” Another friend went further. “He could make people feel homicidal toward him.”

As a result, his causes both benefitted and suffered from his attention, particularly when he crossed the line between persistence and obsession, persuasion and attack. These tendencies caused some friends to cut off contact with Wheeler out of exasperation. He was temporarily banned from posting on his West Point Class of ’66 online bulletin board because his comments were so contentious that others were avoiding the site, friends say.

According to Surge Desk there is 5 facts about John Wheeler:

– Wheeler, who served in Vietnam, was chair of the Vietnam Veterans Memorial Fund, the organization that constructed the nation’s official war memorial in Washington, D.C.

– Wheeler was no stranger to the corridors of American power, having worked for Ronald Reagan, George H.W. Bush and George W. Bush, all of whom turned to Wheeler for advice on defense and military matters.

– Before the repeal of “don’t ask, don’t tell,” several elite schools, including Harvard, linked their opposition of ROTC recruiting on campus to the controversial military policy. Wheeler, a staunch supporter of ROTC, blasted this position.

– He was the author of the memoir “Touched with Fire” The Atlantic’s James Fallows worked with Wheeler on the tome, which discussed the experiences of Vietnam veterans and protesters after the war.

– According to his official bio at Second Line of Defense, a military and security website to which he contributed, Wheeler served as secretary of the Securities and Exchange Commission, and was most recently special assistant to the secretary of the Air Force.

John Wheeler appeared unhinged in the days before his death, reports CBS News correspondent Michelle Miller. Wheeler’s car was found parked at a train station. Miller says investigators have been eyeing a legal battle Wheeler was having with a neighbor whose home is under construction. In a new development that’s raising even more questions, a local TV station is reporting that Wheeler’s cell phone was found inside that home.

According to Newark police, Wheeler was on a train from Washington, D.C., to Wilmington on Dec. 28, 2010.

The next day on 6 p.m., Wheeler enters the Happy Harry’s on Del. 9 near New Castle and asks the pharmacist for a ride to Wilmington. Unable to give Wheeler a ride, the pharmacist offers to call a cab. Wheeler declines and leaves.

On 6:40 p.m. Wheeler enters the parking lot adjacent to the county courthouse in Wilmington holding his right shoe in his left hand and telling a Colonial Parking attendant his briefcase has been stolen. He is seen on surveillance video shuffling back and forth, apparently confused and disoriented, before he leaves about 25 minutes later.

3:30 p.m. Wheeler is spotted in the area of 10th and Orange streets in Wilmington.

8:30 p.m. Surveillance video captures Wheeler wandering through the Nemours Building at 10th and Orange streets. Several people approach him because he appears disoriented or confused. Wheeler declines their help. He is dressed differently from the day before.

8:42 p.m. Wheeler is picked up on surveillance video leaving the Nemours Building through doors on the 11th Street side. He then continues southeast on 11th Street, walking through the Hotel du Pont valet parking area, crossing over Market Street, and is last seen walking on the west sidewalk of 11th Street, toward the city’s East Side.

On December 31, his body was seen by a landfill worker falling onto a trash heap in the Cherry Island Landfill. The spotter called the Wilmington police, who then phoned the Newark police, since the truck’s route originated in their jurisdiction. The cops quickly ruled Wheeler’s murder a homicide.

Wheeler’s neighbor of seven months, Ron Roark, said that he had met Wheeler only once and rarely saw him. Roark claimed that, in the days prior to Wheeler’s death, he (Roark) and his family heard, from outside the Wheeler residence, a loud television within the home that was constantly on, though no one appeared to be home.

On January 6, new evidence surfaced, including knowledge that police had recovered a footprint in Wheeler’s home, as well as his cell phone from his neighbor’s home across the street. In addition, an interview was conducted with one cab driver.

The footprint size obviously has led investigators to assume it wasn’t John’s own workboots, indicating someone was in his home and may have been the individual watching television so loudly, which his neighbor Ron heard the week of Christmas.

Police have sat on the cell phone disclosure, just now making that information known to the public, because they have obviously been running background checks and doing in-house investigation to those listed in John Wheeler’s phone directory.

John Wheeler’s cell phone was found in Frank Marini’s home, the one across from the Wheeler’s residence in New Castle. Law enforcement investigators have conducted a thorough review of the numbers contained, which prompted an interview with one cab driver named Athel Scott.

But Scott denies having ever providing John Wheeler with transportation means, but does admit seeing John on two separate occassions from afar. He told investigators he does not understand why Mr. Wheeler would have his phone number in his cell.

Wheeler “died as a result of blunt force trauma after being assaulted,” the Delaware medical examiner’s office announced Friday. Police said the case remains under investigation. Although the finding clarifies the cause of his death, there are still many unanswered questions.

After Wheeler’s death, the whole Wheeler’s family went down to the Newark police station for questioning. “They treated us like criminals, all of us,” said Katherine Klyce (Wheeler’s wife). “They were rude.” The cops confiscated credit cards, financial records, and Wheeler’s computer. In recent weeks, some of her cards have had mysterious charges, including two plane tickets from New York to Madrid totaling $3,000, according to Klyce.

Wheeler’s death was ruled a homicide, but Newark police have made no arrests, haven’t released toxicology reports and haven’t publicly accounted for much of his whereabouts during the last week of his life.

Despite the lack of communication from the police — or maybe because if it — Klyce is concerned that they’re not devoting the proper resources to the case. “They just don’t have a clue,” said Klyce. So the family — Klyce, her two daughters, Wheeler’s two children, Wheeler’s sister and mother — tried a new approach. On Jan. 30, they announced a $25,000 reward for information that led to the arrest of Wheeler’s killer. No one has responded.