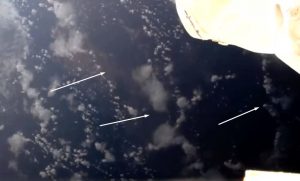 11 hours ago, when the ISS crossed the border of the light and dark sides of our planet, a huge number of UFOs were captured on a camera installed on board the station.

It became possible to see them due to the effect that occurs during the transition from the light to the dark side of the Earth, due to which sunlight “illuminates” all objects in the Earth’s orbit.

In 2020, Congress ordered the Pentagon to produce a report on UFOs. The nine-page report doesn’t say what the 144 sightings from 2004 to 2021 are, but does say that the government wants to collect better data.

You can watch this broadcast yourself in the video archive (time at 2.55).