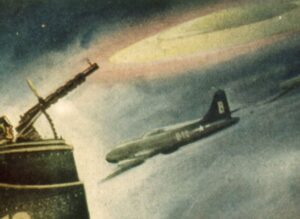 During the Cold War, the air borders of the USSR were guarded like the apple of an eye. Each object, which Soviet air defense specialists could not or found it difficult to identify, was considered an enemy aircraft.

In those years, the CIA contributed a lot to spread rumors about aliens: the Americans hoped that under this sauce it would be possible to launch probes and other aircraft over the territory of the Land of the Soviets. But they miscalculated. Soviet air defenses shot down everything they found.

And yet, a number of local conflicts occurred in the USSR, which experts now identify as collisions with alien ships.

For the first time, the state security of the USSR registered a meeting with an unidentified flying object on June 16, 1948 during test flights of new Soviet fighters over Lake Baskunchak near Astrakhan. At an altitude of ten thousand meters, test pilot Apraksin saw a huge cigar-shaped object next to the plane.

Having reported to the ground about the unexpected “satellite”, the pilot was ordered to intercept the aircraft, and if this fails, to destroy it. But Apraksin failed to complete the task.

As soon as his MiG approached the “cigar”, it fired a thin beam of light towards the plane, blinding the pilot and incapacitating the onboard instruments. Apraksin had to forget about the attack and save himself and the plane. Thanks to experience, the pilot managed to reach the airfield and land safely. But not always so lucky.

The second UFO encounter near Apraksin took place a year later, 400 kilometers from Baskunchak, near Volsk, a regional center. The pilot tried again to approach the luminous object – and again failed.

This time, the object not only disabled the MiG’s instruments – the glass in the cockpit became cloudy from an unknown effect on the jet plane, and the cockpit itself was depressurized.

The pilot was forced to stop pursuit and make an emergency landing in the Volga delta. Perhaps due to an injury sustained during landing, or due to the impact of a UFO after this incident, the pilot had to spend more than a month in the hospital.

It is known that state commissions were created to investigate both cases, but they could not come to unambiguous conclusions. Obviously, after investigations, the highest ranks of the USSR Air Force decided to shoot down everything that could not be identified.

In the next decade, while trying to intercept or shoot down unidentified objects, several aircraft were damaged – the pilots were forced to land the damaged aircraft wherever they were.

Several fighters crashed, and the pilots managed to eject. It was rumored that some Soviet pilots even stopped reporting to the ground about “saucers”. They attacked UFOs only if the objects saw ground-based radars and an order was received from the ground to destroy the UFO.

Another attempt to shoot down an unidentified ship was made on July 24, 1957 in the Kuril Islands. This time, the UFO hovered directly over the positions of the Soviet air defense battery. The battery command gave the order to destroy the object, mistaking it for an American or Japanese aircraft. However, the fire did not bring results. The UFO quite calmly went towards the ocean.

In 1965, a UFO responded for the first time to an attack from the ground. This happened during the Vietnam War, where Soviet military specialists trained the North Vietnamese army in firing from S-75 anti-aircraft missile systems.

C-75 batteries protected the sky over the Vietnamese capital Hanoi and were located mostly 35-40 kilometers from the city.

One of the Soviet military experts said that once a huge dark disk with a diameter of about 300 meters appeared over a newly redeployed battery of Vietnamese air defense.

He was hanging at a height of only one and a half kilometers, and, of course, the battery commander ordered to open fire on it. At least ten surface-to-air missiles were fired at the UFO, but they did not bring any harm to the object and exploded on approach. In response to the aggression, the UFO emitted a thin beam of light that hit the battery precisely and knocked out all the S-75s.

By the way, not only the North Vietnamese positions were of interest to flying objects. In June 1966, a UFO was spotted over an American military base in Nha Trang.

The object was hovering over the base at an altitude of 150 meters. On the ground, at this time, the lights went out, the generators failed, and all communications were cut off. The soldiers were in a panic, the officers were expecting the destruction of the object, but after a few minutes the “saucer” swiftly rose up and disappeared.

A situation similar to what happened over Hanoi happened in 1976 at one of the test sites in the Urals – there, during the tests of the newest surface-to-air missiles, a huge ball with a radius of half a kilometer hovered over the test site.

The command decided to shoot it down with missiles, but this did not succeed – they, like in Vietnam, exploded before reaching the target. A few minutes later, the UFO went up with a candle and disappeared from the radar screens.

But the real tragedy happened in the summer of 1979 in Central Asia over the airspace of the Turkestan military district. There, from the airfield of one of the fighter regiments, a “cigar” about 200 meters long was seen flying above the ground.

To intercept it, two fighters immediately took off from the ground. Since the “cigar” was leaving towards the border with Afghanistan, the order was given for destruction. The lead pilot managed to fire two missiles at the target and … disappeared into the air. In the same way, before reaching the object, the missiles also disappeared.

After the object climbed sharply, the other wingman returned to the airfield. Searches in the mountainous area, which were organized by the forces of the local military unit, yielded nothing – neither the wreckage of the aircraft, nor the body of the pilot were found.

The turning point in this “Star War” was 1980. On April 15, at 00:15 local time, the radar station of the 4th Separate Air Defense Army, one hundred kilometers north of Sverdlovsk (now Yekaterinburg), found four targets.

They kept changing the altitude and direction of flight. The command decided that it could be American automatic drifting balloons with jamming equipment. At 1:30, two MiG-25 fighters and a pair of MiG-23s were raised from the Perm airfield Bolshoye Savino and from the airfield near Nizhny Tagil for interception.

The pilots in pursuit of objects used up almost the entire supply of fuel, but the targets were never intercepted. Air defense specialists later assured: it was clearly visible on the radar that one of the objects seemed to be faulty – it disappeared, then reappeared on the screens.

Since the interception failed, the order was given to destroy the violators of the state border. The pilot of one of the MiG-25 fired two missiles at the nearest target and shot it down.

Immediately after that, the remaining UFOs went up and disappeared from the radar. However, the pilot himself later reported that he had nothing to do with hitting the target, allegedly a moment before the missile was launched, the disc-shaped object was hit by another cigar-shaped aircraft.

The fallen disk was discovered from the air at 5:05 am – it fell into the taiga 20 kilometers south of Verkhoturye. The incident was reported to Moscow to the central command post of the USSR Air Defense and to the chairman of the KGB of the USSR, Yuri Andropov, and by the morning a plane with specialists flew to the Urals. 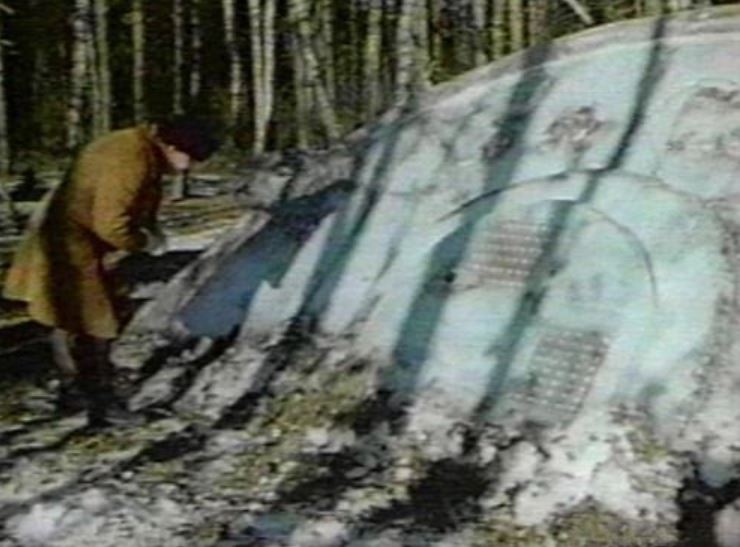 The Muscovites, accompanied by the military, were taken to the site of the UFO crash by helicopter. From the air, it was clear that it was not a balloon that had fallen in the taiga – a large disc-shaped object was visible on the slope of the hill.

Since the nearest road from the crash site was only a few kilometers away, the military who arrived in cars immediately set up a cordon. According to the recollections of Colonel Vladimir Vitkov, all the soldiers were dressed in chemical protection suits, each platoon had a dosimeter.

When approaching the disk, the soldiers felt bad, someone vomited right into the gas mask. Nevertheless, the fighters managed to find a hatch on the lower part of the disk, but could not go far inside – they were getting sick. To evacuate the object, the military dug in the disk so that the cables could be brought under it.

While the work was going on, Vitkov watched as scientists in protective special suits nevertheless got inside the device and took out the bodies of two pilots – they were placed in sealed lead containers and taken to Nizhny Tagil, and from there to Moscow.

The disk was taken out by a special Mi-10K cargo helicopter to a military airfield near Sverdlovsk, from there to Ramenskoye, and later to the hangar of the Institute of High Energy Physics.

It was after this incident that the order was issued to the military units of the Air Defense and Air Force not to open fire on unidentified flying objects, without making sure that these were terrestrial vehicles.