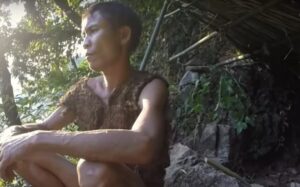 Ho Wan Lang has lived away from civilization for 40 years. What was he doing all this time? He hunted, picked berries and fruits, and in every possible way avoided any contact with people, reports Unilad.

Now, for more than 8 years, this Vietnamese has lived in a small village and never ceases to amaze others with incredible stories.

In 1972, his father took the still very young Ho, his brother, and fled into the jungle to hide from the Vietnam War. Story took place in the Taicha Quang Ngai area. For decades, a man with children lived in the rainforest, taught children to hunt and survive in the wild.

Now Ho can build a hut from scrap materials, create something like clothing out of leaves, and hunt without modern weapons. He also said that he did not know about the existence of women – his father never talked about them.

Only at the age of 41, when the Vietnamese met Alvaro Cerezo, he learned that there was no war, there were women, and it was safe in the village.

This meeting radically changed their lives. For 8 years, men have been living among people. It was difficult for them to adapt, but they do not want to return to the jungle. Ho also says that he lived all his life and did not know about such concepts as good and evil, friendship, etc.

In the first year of adaptation, men were often sick, because they did not have immunity from many viruses. Despite all the difficulties, Ho adores his new life and still hopes to find a wife.