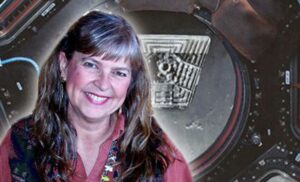 A former U.S. Air Force radar tracking operator Niara Terela Isley recalls her traumatic experience of being abducted multiple times, experimented on, and forced into slave labor on a secret moon base.

While traveling with some of her colleagues on a mission at the Tonopah Test Range, their aircraft encountered a glowing UFO that maintained course alongside them. Ground control instructed them to get a radar lock and intercept the flying saucer.

Upon landing, Isley and her colleagues were quickly taken into custody by one of the Air Force’s covert branches.

In a book she wrote, the former airman describes her ordeal. Over the course of several months, Isley was abducted about 8 to 10 times and taken to a secret moon base on the dark side of the Moon.

The base was under the control of reptilian beings but operated by human personnel. Isley claims that like her, most of them were held there against their will.

“I was very poorly fed and worked hard during the day cycle, operating some kind of electronic equipment for excavation at times, and doing physical manual labor at others, such as lifting and stacking boxes. Worst of all, I was used for sex during what passed for night there, from man to man,” she wrote.

The pinnacle of this inhumane treatment was a long string of experiments designed to mentally wear her down and remove her free will.

The medical procedures were performed by Gray extraterrestrials, which means that the conspiracy runs deep.

And so it went on and on for months until she was finally released. But Isley is convinced she wasn’t set free without first being subjected to a memory wipe.

In fact, she says that an acute absence of memories from that period tipped her off she might have been the victim of an abduction.

For a period of three months in 1980, Isley had no memories although at the time she was working for the U.S. Air Force.

Unnerved by her missing time, she underwent hypnosis and recovered her suppressed memories. It seems like the memory wipe was unsuccessful.

Niara Terela Isley and many other abductees are convinced that most — if not all — abductions are actually performed or supported by military forces worldwide.

A popular conspiracy theory calls these operations MILABs (Military Abductions) and hypothesizes they are way more common than you would think. Isley and her peers recommend hypnosis therapy to anyone who’s experienced long periods of missing time.

While Isley brings little evidence in support of her testimony (besides her testimony), she does bring up several interesting points.

The presence of a joint Reptilian-Gray-human secret base on our satellite is worrisome and the abduction phenomenon is alarming, to say the least.

But the perspective of unwillingly carrying memories of being forced into slavery and routinely experimented on is something else — the seed of paranoia.

If Isley is true, we’re all living a lie.

Former Brazilian Lieutenant-Brigadier: “UFO technology is far ahead from ours”

New Study Claims Extraterrestrials May Have Visited Earth In the Past