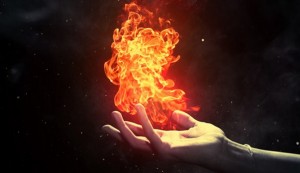 Fire is a very mighty element. It is considered to be the basis for modern-day life, moving cave men into light (literally and metaphorically) so that they could march toward the future. In fact, Greek mythology contains that fire is a gift from the gods, stolen by Prometheus and given to man without Zeus’s permission.

Fire is truly the supply that makes civilization possible, providing heat, light, and power. Such a key substance has always looked mystical in its own right, but mortals and even certain deities who could control this primal force were considered to be extra amazing by taking on the prestige of the element that they could manipulate.

However, the idea of a human controlling the power of fire really became part of the modern popular culture with Stephen King’s book called Firestarter. The term “pyrokinesis” itself that described the ability of one to create or control fire with the mind was coined by King, being derived from the Greek words “pur” for “fire” or “lightning” and “kinesis” which means “motion.”

Truth Behind the Flame?

Heat and fire are favorite topics of beginning scientists everywhere because of the inherent fascination with the two. Therefore, many have tried to investigate the possibility of a person being able to create or control fire. Modern scientists at the moment do not recognize pyrokinesis as there is currently no known method for a human brain to trigger fire or explosions from a distance without a device that releases compounds that spontaneously ignite upon contact with oxygen or some sort of triggering device located at the place where the fire is to be started.

However, many aspects of the mystical and hidden powers of the human mind and body defy current scientific beliefs. This fact leads other nontraditional scientists to reach outside the box to detail pyrokinesis.

Explanations of this power that keep science in mind keep the real process of heat production in mind by saying that the ability is merely control over the atoms of an object and the power to speed up or excite those basic elements to the point of increasing thermal energy until they are forced to ignite into flame—which is similar to the primary function of a microwave in its duties of heating food. The fact that everything is composed of these particles means that the power would not be limited to mere objects but could include atoms of air to create independent flames as well.

Achievement of the Power

If you follow the belief of the first group, there are ways to tell if you are one of the special humans who have the psychic gift of pryokinesis. Most signs of a person possessing a psychic ability are small and therefore tend to be overlooked by close family members, friends, and especially the person involved as he or she just assumes these happenings are normal or merely a quirkiness of their lives.

One of the smallest signs of this gift is experiencing a quick or rapid rise of heat from within your body frequently or at least more often than a normal person should—think of a woman’s menopausal continuous hot flashes when you are not going through that phase in life or not even a woman. Major signs of possessing pyrokinesis is that someone gets burned or physically feels intense heat when he or she touches your skin or anywhere along your body. Of course the most obvious and straightforward sign is one’s having the capacity to ignite or spark flames.

Even if you do not believe that pyrokinesis is a gift, the proper attainment and expansion of this power can only be achieved through constant practice, intense concentration, and unwavering meditation techniques. A person must become skilled in controlling his or her mind as well as personal energy flow. The second pyrokinesis belief group that thinks it is an ability which merely needs to be coaxed into being has a general three step method to unleash the power to create and control fire. First, you must have be in the proper state of mind. You have to tell yourself that you do have this power and can command it. Having an open mind and a firm resolve are key.

Next, you need to channel your energy through meditation. Focus on your personal energy in a safe, quiet space. However, you should not begin manipulating the energies of fire until you have proper control over handling energy as you might experience burns to your belongings or the dangerous side of fire burning your person. Finally, practice. Practice. Practice! These powers do not develop overnight and need daily work to properly evolve. Since pyrokinesis is not a normal psychic gift, it will most likely require even more practice than you realize. Remember to be careful though as it is also a complicated ability that can easily cause harm to you and others.

Here are a few helpful thoughts to keep in mind while you meditate and practice on controlling pyrokinesis. They should put your brain in the right mood to begin handling and directing fire energies. Simply visualize these pictures in your mind to focus on the wonder of fire:

-Flint pieces hitting steel to make fire. -A glowing ember of some flammable material. -Thermometer increasing. -Energy and heat throbbing in your hands and fingers. -An oven heating up a space. -Bands of energy going from objects of heat (lit light bulb or human body) into cooler objects. -Thousands of molecules moving faster and faster, colliding into each other in the process. -Flares rolling off of the sun to heat the cold space around it.

A fun way to practice and to realize that you are truly on the right path toward being pyrokinetic is to perform the Dancing Flame exercise. Being alone in a room (making sure that there are no flammable objects in the immediate or close area), light a candle. It can be any type of candle of your choosing. Focus on the flame of the candle, attempting to create a tunnel of energy between you and the fire.

Once you feel a strong connection between you and the fire, send a ball of programmed energy to the candle, telling it to move in a direction of your choice by making your thought energy push the flame. This technique can eventually be perfected to completely put out the flame as well by applying energy to the entire candle which covers it up to the point where no oxygen can get to the fire. It takes a great deal of practice to get to this point, but it is a big level up for those attempting pyrokinesis.