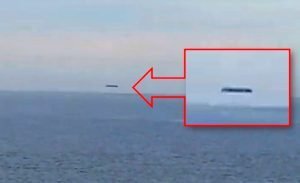 Kevin Short was on a fishing / camping trip in Wales on December 12, 2019 when he saw a huge object hovering over the sea on which he wanted to film it, reports ufosightingshotspot.blogspot.com.

Kevin has no idea what the object could have been, but after viewing the video, it does not appear that the object is linked to a ship or platform in the sea.

Despite the object’s enormous size, it also doesn’t seem to be a blimp.

Is it likely he’s been watching a massive UFO cylinder man-made or extraterrestrial?