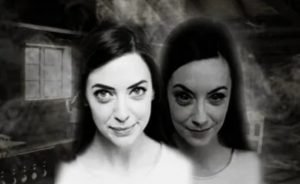 Do you have a ghost? A doppelgänger, German for double goer, can be considered to be the ghost of a living person. These apparitions are often considered dark omens because they primarily appear during a crisis.

This gives Doppelgängers a dark reputation though in general they appear to be simply messengers. Most often the doppelgänger is simply attempting to pass on a final message to love ones. But sometimes contrary to our understanding can go back in time and warn the host of impending disaster.

Examples in folklore include the vardøger of Norse mythology. The vardøger apparition can be seen performing the actions of a person before they arrive resulting in a sort of tangible déjà vu shared by many witness’s.

Shamans in Finish folklore can summon forth the spirit of themselves or that of another person. The spirit can be directed by the summoner to receive or send information to a person with a close emotional tie to the spirit messenger.

In ancient Egypt the Ka was the spirit double of the living person duplicating them exactly in every way including requiring food and drink. In the Egyptian view everything had a Ka and this was why possessions and food was left in tombs. It was for the use of the person’s Ka that lived on after the body.

A symptom of schizophrenia and epilepsy can be Heautoscopy or seeing one’s body at a distance can be seen as an explanation for doppelgängers but does not explain group sightings. As an interesting aside is the psychiatric disorder known as negative autoscopy or being unable to see one’s self in a mirror. Vampires?

Michael Persinger, Shahar Arzy, Stanley Koren and others have reproduced and effect that is similar to the doppelgänger phenomenon. This was through the electromagnetic stimulation of a patient’s right temporal lobe of the brain. Some patients claim to see or sense the shadowy presence of another person.

Lincoln is said to have had an illusion or dream before his election to the presidency. He claimed to have seen himself in a bureau mirror across the room. He saw himself at full length but there were two faces.

This bothered him so he lay back down again and saw his image again in the glass on the table. He saw tow face but one was pale looking. The images haunted him and he told his wife about the strange occurrence. A few days later he saw it again but after that it vanished and never returned.

Vice-Admiral Sir George Tryon was participating in ship maneuvers on the Syrian coast when he was seen walking through a room at his home. Later word was received that he went down with his ship after it collided with another ship.

He was one of the greatest poets of the English language. It is said that he encountered his doppelganger sever times. Shelley’s final encounter occurred in Italy when his doppelganger silently pointed toward the Bay of Spezia. Shortly before his 30th birthday in 1822, Shelley died in a sailing accident in the same bay.

Doppelgängers, as dark doubles of individual identities, appear in a variety of fictional works. Some stories offer supernatural explanations for doubles. These doppelgängers are typically, but not always, evil in some way. The double will often impersonate the victim and go about ruining them. Sometimes, the double even tries to kill the original.

In the popular drama series, The Vampire Diaries character of Elena Gilbert is a doppelgänger of the vampire Katherine Pierce.

Philip Roth’s novel “Operation Shylock,” the author and protagonist travel to Israel in order to confront a doppelgänger.

The 2010 film Black Swan tells a story about Nina Sayers, a dancer who lands the role as Swan Queen in Swan Lake; the film contains scenes of the character that sees a double whenever she feels insecure of herself.

The 1993 movie Doppelganger A woman moves from NYC to LA after a murder, in which she is implicated. She is followed by what is apparently her evil alter-ego.

So do you have a ghost. Overall, it’s probably best to never know.