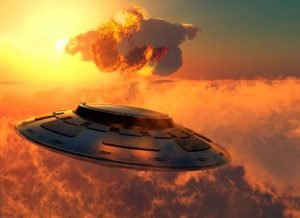 The Trinity Nuclear Test Site in New Mexico is a historically significant location in the United States. It was the site of the world’s first nuclear detonation, which significantly changed the course of history.

This site has also been the site of numerous other significant events, including a mysterious incident involving an unidentified flying object (UFO) in the days before the infamous Roswell incident in 1947.

The incident occurred in July of 1945 and was witnessed by several personnel at the site, including renowned physicist J. Robert Oppenheimer.

According to reports, the UFO appeared suddenly in the night sky over the test site and maneuvered around in a strange pattern before disappearing. No one was quite sure what it was or where it came from, but it was clear that it was not of human origin.

The incident was not reported to the public at the time, but Oppenheimer and other witnesses discussed it in private. It was speculated that the UFO was a form of advanced technology that had been sent to observe the nuclear test.

This is not an unreasonable theory given that the test had potentially far-reaching consequences and may have been of interest to any advanced species in the universe.

On August 16, 1945, just a month after the Trinity nuclear test two boys, Jose Padilla and Reme Baca, heard a crash. They reportedly saw an avocado-shaped craft, inside of which were two mantis-like occupants, one of whom was in pain. The object reportedly struck a communications tower during its descent, and the two boys witnessed the US Army trying to remove it.

A third witness, bomber pilot Lt. Col William Brothy, was coming in for a landing at the nearby Alamogordo air base when air traffic controllers asked him to investigate the sudden loss of signal from a communications tower. Brothy’s report describes the damage to the tower, as well as the egg-shaped object and the two boys huddled around it

Whatever the case may be, the incident at the Trinity Nuclear Test Site was certainly not an isolated occurrence. Reports of UFO sightings had been increasing in the United States since the 1940s, and the incident at Trinity was just one of many.

It is likely that the Roswell incident in 1947 was just the tip of the iceberg, as there were likely many more sightings that were never reported or discussed publicly.

The incident at the Trinity Nuclear Test Site is an intriguing one and it is a reminder that the world is a much bigger place than we think it is.

It is possible that the incident was just a coincidence or perhaps something more meaningful. Whatever the case may be, it is certain that the incident has become a part of history and will remain a source of wonder and speculation for years to come.

The incident at the Trinity Nuclear Test Site is a reminder of the power of the unknown and the importance of being open to the possibility that our universe is far more complex than we can possibly imagine.

It is a reminder that the truth is often stranger than fiction and that the only way to truly understand our place in the universe is to be willing to explore the unknown.

Dr. Steven Greer: Aliens consider us a problematic civilization and officials know about it