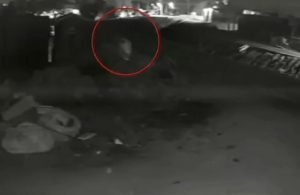 A video that was recently released by the Mexican ufologist and journalist Jaime Maussan shows the moment in which two mysterious entities descend from the sky in the presence of three dogs that bark at the entities and run frightened by the weird event in San Vicente Chicoloapan, State of Mexico.

“These are two humanoid-shaped entities. They approach a few centimeters from the ground and could possibly have walked,” narrates the report attributed to journalist Carlos Clemente.

The presumed entities continue moving until they run into a fence and there the recording suffers a cut.

“At that moment, the smallest entity is seen completely from the side together with the largest one and it is possible to see them perfectly against the light”, explains the narrator and concludes: “It is an extraordinary image that reveals a mysterious aspect of the world that we do not see” reports ufosightingshotspot.blogspot.com.

As one might guess, many viewers thought that the footage depicted the arrival of two alien visitors to our planet, or that it depicted some kind of supernatural entity that was accidentally captured on tape by the surveillance camera.

Needless to say, folks who believe in the supernatural are ready to share this as proof that other beings not of this world walk among us.